Arguing with a computer.

It seems I have to, from time to time, just to make sure we still understand who the boss really is here...And it ain't the freakin' machines, man...

My stepson seems to live on the internet. Who am I to talk, I spend a lot of time online or with computers too. It's what I do. When I first started learning about Personal Computers, I fought with the machines a lot. I'm completely self taught. Never had a real class on hardware or anything close to that well organized. I just seemed to (mostly) get it. I knew enough about electronics and such to understand how the contraptions work. Plus I read alot. I mean ALOT! And I still do...

Now,Software I've had plenty of training on. Both formal and informal. Itdidn't take me too long to figure out if I can't make it work, "Where's that manual? "is the next question I ask.

But let's set this aside for now...As I was trying to talk about this week.

My stepson - The Cool One's (in his own mind anyway) computer has sort of been on the fritz. Starting about three weeks ago, I think. Started to have some trouble accessing certain websites. He couldn't get to hisspace on myspace.com. (He uses the most god-awful color scheme with this gothic font. I cannot even read his stuff, it gives me a freakin' headache just to look at it.) He kept getting logon errors. Also had trouble getting to some others as well. Some I knew were perfectly legitimate. Like the TABC (Texas Alcohol Board or something or other)or the Coast Guard site.

He was spending more and more time on (what we will call) My Machine!This terrifies me as he has no compunction about surfing to dangerous sites that attempt to drop all kinds of Mal ware and trojans and spyware, and other assorted bits of (be)'ware. I know this as I've hadt o clean his machine (and mine)up before based on his surfing and downloading habits. And my various scanners I use were picking up more spy and ad ware on MY system. This has got to stop, I thought to myself.

The Cool One keeps his computer in the dark, dank, dungeon he calls his bedroom. And he only calls Tech Support (Me) when he cannot figure it out, or at least a way around it, himself. Like myself he hates to admit defeat! Earlier this week - he had reached that point. Asked if I would mind having a look. Called me at work too. Gotta be serious, because he rarely does that.

So I questioned The Cool One at length about what has been going on with his PC. How's it running? It seemed to be running slow. And he couldn't seem to connect to certain websites. Are you picking up more spyware? Don't seem to be...No more than usual, anyways. Have you bought any software recently? Yes. Did you notice any performance problems after you installed it? Yes...Having trouble with your wireless connection? Yes - A lot!

That conversation took place on Monday. I didn't get up there to take a look until Tuesday evening late (Lotta projects going on at work as well as Month end close and Quarter close too - so I've been working later hours this week) The software package he had bought was basically the entire Security Suite from Mc Affee. Oh man! why didn't you talk to me first, dude?

He had bought himself a Dell desktop with his graduation money. Personally I don't like them but, you know....And we've (I've) tweaked it a little since he got it. Anyway, when he bought it, he got a trial period of McAffee's Security Suite. When that expired I set him up with the free Zone Alarm packages - Firewall and virus scanning. I use Mc Afee myself and have for years. So I can tweak that SW pretty hard.

But I think the last overhaul on the Security Center went toooooo far.So I may not re-up myself next year when mine is up for renewal. Why do these companies feel the need to over engineer everything?

The Cool One was under the impression that his Zone alarm stuff was no longer performing as well as it had in the past - so he bought asubscription to McAffee The Whole enchilada - Hell in my opinion - All he really needed was the Firewall, and Viruscan. Would have been a lot cheaper.

At any rate I waded through the hazardous waste dump he calls his bedroom and sat down in fromt of his PC. Checked his system tray - he seemed to have two firewalls up and running and two wireless internet connection icons - What th'? Checked his browser - slow as molasses in January. It was so slow I shut it down before it loaded the page.

So I made sure the McAfee Firewall was up. And shut down the ZoneAlarm one. Removed it from the startup. Did a warm reboot. No dice. Looked at those Wireless connection icons in the System tray Netgear seems to be running okay except I cannot really change anything. Not good. Open the one for McAfee Wireless Network Security. This stupid program has him using one of our neighbors' wireless networks and seems to have banned our connection from being used. I've got no idea how that happened. But the network he's using is topped out at about 53 mps. No wonder he's got problems!

Another re-boot. Gotta turn some of this shit off! Managed to get him connected to Our network. Only now NOTHING sees the internet. The SW says we're connected, but browser pages come up blank. Hell, now somehow I've made it worse!

So I'm looking through the help files for some way to turn some of this McAfee stuff off. See a lot about EN-abling various aspects of it. But practically NOTHING about DIS-abling it. Now what? I look at my watch and see it's almost 11:30. And let's face it - I am dead tired. Not a state I do my best work in. I bail and go downstairs - get a glass of water and go to bed. I then get this bright idea to surrf the McAfee site and see if I can find a number for Tech Support.

I'm running through their support pages and it looks like they don't wanna talk to you until you've exhausted all other resources available. Now why would you want to wait to talk to a customer until they are so pissed they cannot even form a coherent sentence? But wait - there is a "chat with a technician" option. So I click that. Soon I'm having a conversation with a fellow with an anglo sounding name, but I can tell we're dealing with ESL. I get about half way through my explanation of what the issue is and the chat client just locks up. Frozen. Deader 'n a doornail. Shit! Close that window and start another. Get a different guy (of course) with an anglo sounding name - but ESL again. Bet these guys are in Bangalore or somewhere close. I don't really give a rat's ass where they are as long as they know their stuff. And he does. Tells me I need to uninstall the Suite, use a cleaner (McAfee is apparently as bad as AOL when it comes to putting stuff everywhere on your Hard drive) he sent via link, and then re-install. Gives me detailed instructions and asks me if I got the file and did I understand his instructions?

"Yes I do," I say. Un-install=>reboot=>Use the cleaner thingie=>reboot=>re-install selecting only the stuff I think The Cool One needs. I tell him thanks and sign off. I'd also copied the entire conversation to a text file. Then I shut down, turn off the lights and get me to bed! 5:00 AM come early. Especially if you don't get to bed before 1:00 AM. Sheesh!

I'm too tired on Thursday night to do much of anything, except crash. Early.

Friday night I'm up in the Toxic waste site and it all goes without a hitch - his connection is back up and humming along at about 110mps within an hour and a half.

You would think his ass would show some gratitude right? Well not exactly - Made me feel like I was expected to clean up his messes. Kinda Chaps my ass but...hey!

It got his spyware collecting ass off my PC so all is well.

Just barely before first light. I apologize to any one using dial up.

I was out in the back yard having a smoke and my first cuppa. I happened to look through the trees to the east. Went in the back door, through my office, and right out the front door with my camera. Took a few decent pictures. Digital cameras sure see things in a different light thna the human eye though. I posted these on my flickr account. I've got 3 originals here and 3 that I tweaked - just a little with PaintShopPro. Check these out. Clickee clickee to get a larger picture. 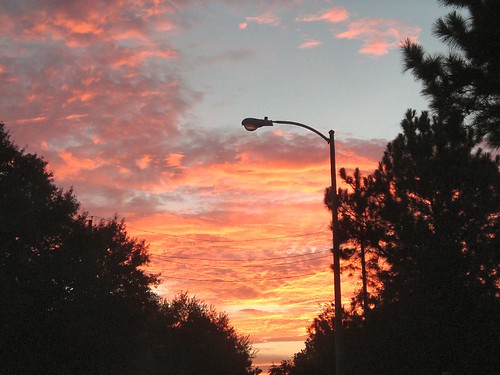 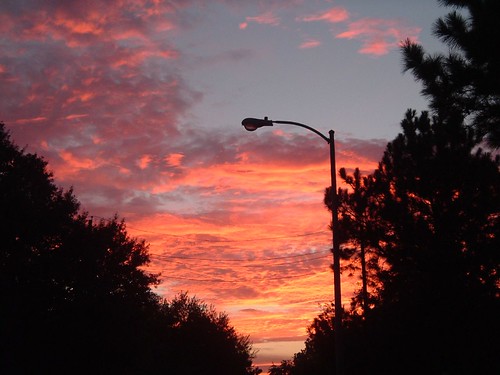 The one on the right is just how it came out of the camera. The one on the left is a little closer to the colors in reality. Both are good pictures. I cannot decide which one I like better. 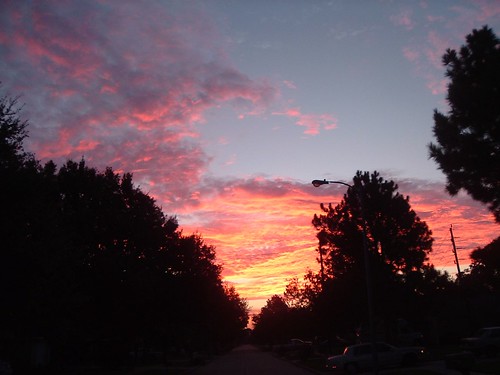 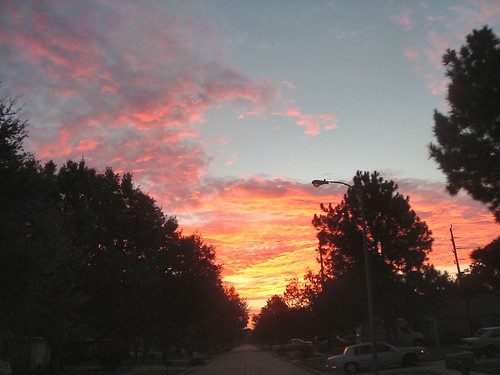 Well I switched the order. So Original on the left. Slightly tweaked on the right. The colors on the right are a little closer to the real thing. I still like 'em both.

Same with the ones below. I zoomed in a little more on this one. I think I actually like the one on the right better on these two, though. You get more of the blue sky, whereas with the other it gets washed out by the reds. 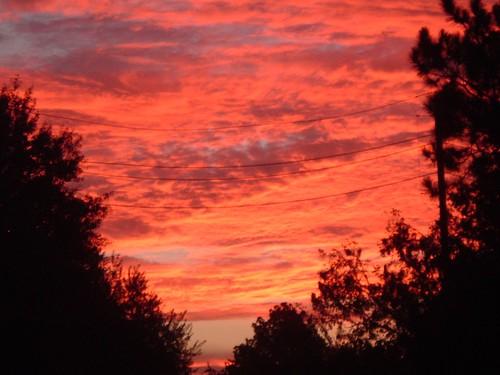 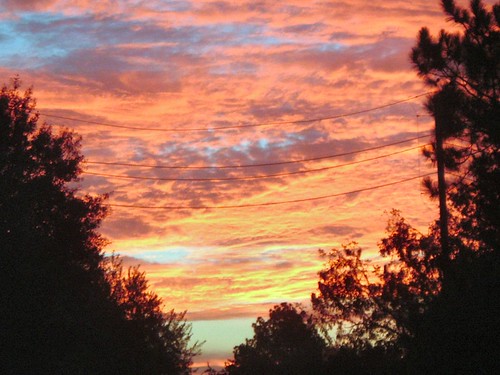 Full size images at the link to flickr above.

What do yall think?
Collapse