I didn't even realize there was a feeds page on lj for syndicated sites. Stumbled on this on

sahlah!
Here's a couple of thingies from my feed. First up: 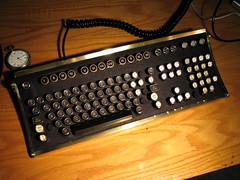 How about this beautimus "steampunk" brass keyboard. This guy, Jake Von Slatt, of the steampunk workshop made this great looking fully functional brass keyboard. And he lists all the steps too.


He made it from an old IBM keyboard with some ancient typewriter keys and some glass inserts where the keyboard status lights go.

Then a friend of his, Doc Datamancer, made a brushed aluminum version.

I am having a hard time deciding which one I like more. But needless to say...They are both ubercool in this tech-head's opinion.


And then, since I seem to be on a steampunk kick right at the moment. How about a Steampunk Mouse? 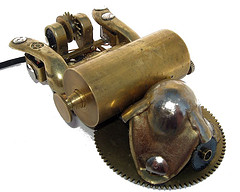 Also handmade - with the guts of a USB mouse. It looks to be made with various every day kind of parts. Including if I'm not mistaken parts from a toilet seat!. Pretty cool! Made by Jake Of All Trades. And he calls it "The Bug"!

Details on on Jake's website Jake of all trades. This one I got via boingboing.net. They got it via make.

For those of you that might be wondering what the hell steampunked stuff is:

The following is from wikipedia, but obviously steampunk no longer refers solely to literature:

Steampunk is a subgenre of fantasy and speculative fiction which came into prominence in the 1980s and early 1990s. The term denotes works set in an era or world where steam power is still widely used—usually the 19th century, and often set in Victorian era England—but with prominent elements of either science fiction or fantasy, such as fictional technological inventions like those found in the works of H. G. Wells, or real technological developments like the computer occurring at an earlier date.

It is often associated with cyberpunk and shares a similar fanbase and theme of rebellion, but developed as a separate movement (though both have considerable influence on each other). Apart from time period, the main difference between cyberpunk and steampunk is that steampunk settings tend to be less obviously dystopian.
Collapse