Usage: When the tyrant assumed power, he soon extirpated the vestiges of political democracy.

Although gas prices are high enough to suck the life out of a guy's wallet (Holy Crap!),

alleycat2681 and I had a good drive up to Nacogdoches yesterday. And my car get 30+ miles to the gallon(!). It was a beautiful day in east Texas...

We listened to A Prairie Home Companion on the way up. I like to listen to Garrison Keillor talk about the scandanavian (and lutheran) ways of thinking that seems to be prevalent in that part of the country - Midwestern US. I just totally get it. My mom and her parents and virtually all their relatives were scandanvian and Lutheran! So I guess I should!

And about the time it was over, we lost the station, so I switched the radio off so we could talk for a bit. I love talking to my girls about thier plans for the future. Or just anything in general. Trials and tribulations. Joys and work. School...You name it.

The little Saturn that could seems to be having an overheating issue though. When ever we stopped, the tempezature was showing a tedendancy to climb into the hot zone. When we got to Nac, I had the oil changed and bought some coolant mix. We did the grocery shopping thing and I droppe her and the groceries off at the apartment (OMG!) where she'll be staying until August when she goes to Tuscon.

Just a few pictures to share from my ride back to Houston:

Further along the road. You can even see trees in my rearview mirror off on the right. Objects are closer than they appear. 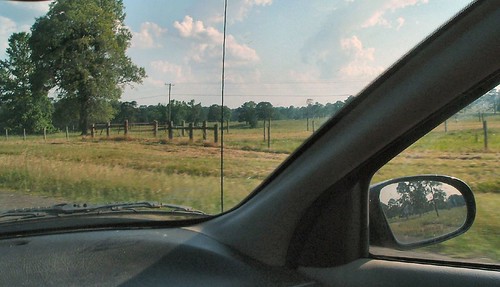 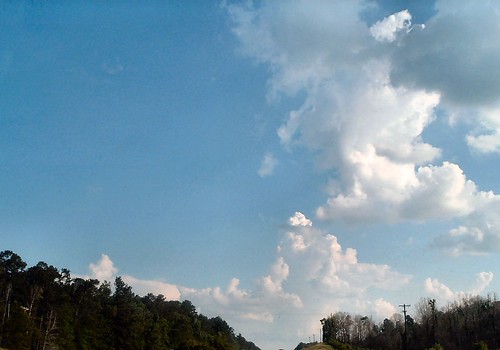 Another shot of that blue Texas sky! 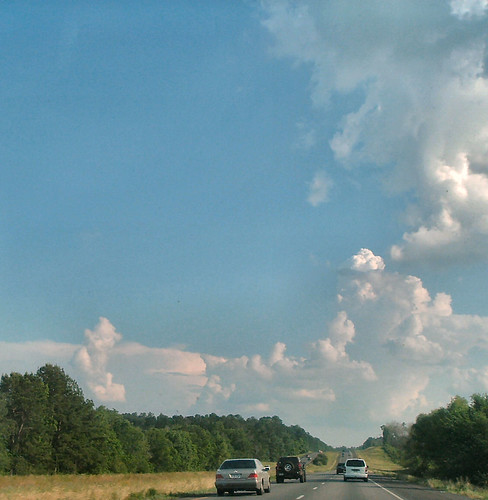