"Finish each day and be done with it. You have done what you could. Some blunders and absurdities no doubt crept in; forget them as soon as you can. Tomorrow is a new day; begin it well and serenely and with too high a spirit to be encumbered with your old nonsense."

1993: NASA loses contact with the Mars Observer, a scientific probe sent to study the geology and climate of the red planet. Contact with the craft is never re-established, and the reasons for its disappearance remain a mystery.

The Mars Observer, launched on Sept. 25, 1992, was supposed to be the first of a three-probe series for NASA's Planetary Observer project -- the others were bound for Mercury and the moon -- but its failure resulted in scrubbing the other two missions.

Contact was lost with the Mars Observer only three days before it was to enter its Martian orbit.

Had the spacecraft attained a successful orbit, the primary objectives for the mission included determining the elemental makeup of the Martian surface, studying the planet's magnetic and gravitational fields, establishing the nature of its atmospheric circulation, and evaluating the topography.

All of that would have to be left to future missions, and the Mars Observer goes into NASA's annals as a major failure. If anything was gained from the $980 million project, the scientific instruments developed for Observer were used by subsequent orbiters.

Latest position and projected path of that right bastard - Dean. And into the Bay of Campeche he goes! Poor Mexico...They get a double dose! 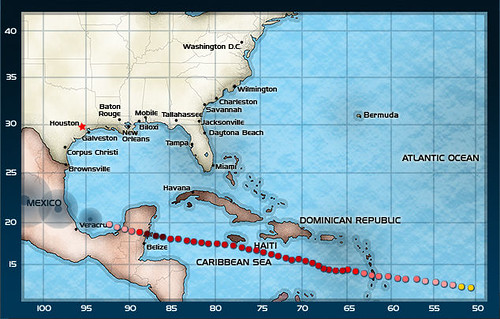 A woman was at her hairdresser's getting her hair styled for a trip to Rome with her husband. She mentioned the trip to the hairdresser, who responded:

"Rome? Why would anyone want to go there? It's crowded and dirty. You're crazy to go to Rome. So, how are you getting there?"

"We're taking Continental," was the reply. "We got a great rate!"

"Continental?" exclaimed the hairdresser. "That's a terrible airline. Their planes are old, their flight attendants are ugly, and they're always late. So, where are you stayi ng in Rome?"

"We'll be at this exclusive little place over  on Rome's Tiber River called Teste."

"Don't go any further. I know that place. Everybody thinks it's gonna be something special and exclusive, but it's really a dump, the worst hotel in the city! The rooms are small, the service is surly, and they're overpriced. So, whatcha' doing when you get there?"

"That's rich," laughed the hairdresser. "You and a million other people trying to see him.  He'll look the size of an ant. Boy, good luck on this lousy trip of yours. You're going to need it."

The hairdresser asked, "Well, how was your trip to Rome?"

"It was wonderful," explained the woman, "not only were we on time in one of Continental's brand new planes, but it was overbooked and they bumped us up to first class. The food and wine were wonderful, and I had a handsome 28-year-old steward who waited on me hand and foot. And the hotel was great! They'd just finished a $5 million remodeling job and now it's a jewel, the finest hotel in the city. They, too, were overbooked, so they apologized and gave us their owner's suite at no extra charge!"

"Well," muttered the hairdresser, "that's all well and good, but I know you didn't get to see the Pope."

"Actually , we were quite lucky, because as we toured the Vatican, a Swiss Guard tapped me on the shoulder, and explained that the Pope likes to meet some of the visitors, and if I'd be so kind as to step into his private room and wait, the Pope would personally greet me. Sure enough, five minutes later, the Pope walked through the door and shook my hand; I knelt down and he spoke a few words to me."

He said: "Where'd you get the shitty hairdo?"
Collapse