Went to visit with some friends in the PM yesterday. Old friends. Real old friends. I probably haven't spent any real face time with them for at least 10 Years. (!) Truth be told, I've missed them terribly. Of course I didn't realize that, until I saw them recently at The Offspring's Graduation Event.

Nancy and Ivan, and I have a history that spans at least  20 years, I think. Or close to that.

Here they are having a moment at the Offspring's Graduation Event: 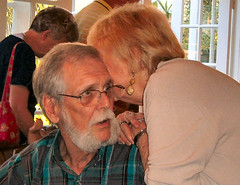 They are good folk and I value their friendship greatly. As a matter of fact, Ivan stood with me at my second wedding when I married The Redhead. He was a sort of father figure for me for a long time. As my Dad died in 1973, I hadn't really had one until he came along. We could really talk about just about anything. I needed that. Still do, I reckon...

Yesterday we talked a great deal of the past, and the future of TexasT's. And what they had been up to. Ivan has been retired for quite some time now, but has his own small woodworking business. And he is really good at what he does. Probably because he loves it so much. You should see their house!

Nancy teaches painting classes to relatively small groups of folks. Through that I believe her own skills as an artist have benefited as well.

As we were talking, somehow it came about that Nancy was having some serious PC issues. She had gotten hijacked by some piece of software that modified her startup and ran a "scan" (scam is more like it) that would find a pile of "issues" with her PC, that the company offered to fix for the low, LOW price of $39.95. This piece of shit was so insidious that you could not run (almost) anything else on the PC. She didn't know where she had picked it up - but it had totally fucked her system.

Being the geek that I am, I offered to have a look...Also because I cannot stand to see crapware makers win!

I spent the next two or three hours fighting with this piece of crap.

Some days I really hate Windows.

I tried to de-install this and two other offenders of the same ilk. Came out that one of their sons who is a Mac Geek had also tried to help out...but to no avail. I could see some of the steps he had taken and they were all good ones. Apparently he can make Macs stand on their head with a few clicks of his "Mighty Mouse" (according to his parents) but has limited PC skillz!

I looked in the startup folders and a few other places that I have found for crapware to insinuate itself. Try as I might I couldn't get this POS to uninstall. Not from the Control Panel nor the folders where the crapware was located. I have some pieces of SW at the house that can help with this kind of investigation, but not knowing I was going to need them, I left them at home, natch! And couldn't really remember where I had picked them up. (I need to keep better notes and mount them on my handheld)

It was really starting to piss me off. Finally, growling with frustration, I opened up the dreaded (for me anyway) msconfig. I've gotten better at manipulating this master setting utility over the last year or so, but I still don't like messing about with it. I found the piece of crapware on the startup tab. Unchecked the tick boxes (there were three) and initiated a restart.

It still hijacked the damned computer. I went outside and had a smoke and thought on this. Ivan thought it was kind of funny. And I suppose it was, in a perverted sort of way. I'm smoking and pacing in their front yard, thinking furiously. I've never been defeated by a piece of Crapware yet, and I wasn't about to start then either. Went back into msconfig because I thought I had missed a setting for the reboot. And I had. Set that switch - another reboot - it was better but the crapware was still running in the background. I was getting to the end of my knowledge threshold and at one point suggested we take a shotgun to this machine and go buy a frickin' Mac. I was only half kidding. Ivan has an iMac and so there are none of the issues that Nancy was experiencing.

Around this time dinner was ready (They had asked me earlier if I would stay for dinner) Pork loin, green beans, corn, a big ol' baked sweet potato, and home made bread! Topped off with cold iced tea! Yummmay!

After that scrumptious feast, back to the job at hand:

Some days I really hate Windoze...*sigh*

Thinking:  We could wipe the damned HDD and be done. But that would initiate a serious amount of work on either my part or theirs, (and probably both them AND me!) so I didn't really consider this, except as a last resort solution. Any one who has had to do this knows what I'm talking about. It can take days to get things back to the way they were before. And stabilized. Effing Micro$oft!

Nancy was fretting peripherally about her bookmarks and games and email and other stuff. She uses the system to listen to a few radio shows, research for art projects, plays a bunch of games. A lot of games. You should have seen her desktop. Cluttered to high heaven. And email. Not a lot of data - other than favorites and a few Wordperfect files and some pictures. And the solution of last resort was fast approaching.

I decided to try a system restore. Praying that this was a feature that was turned on on this machine I started the program. I couldn't really remember the default setting for this.

YES! I asked them when this bullshit had started so I could pick a point in time that was beyond that. "About two weeks ago" Okay - no restore point for that day. Of course! But three weeks ago? Perfecto...

Set the machine to restore to this point and stepped outside. Nancy followed me out. Ivan joined us and we had a semi spirited discussion about crapware and MicroSoft and Apple computers. If this didn't work, I was recommending they wipe or scrap the machine and go buy a Mac Mini. Probably got more computing power than Nancy would ever use - but none of this bullshit would be going on.

You A$$HOLE$ who write these types of programs should be strung up! Just sayin'!

My next machine, I think, will be one of these. Back in to check on the system - Hmm looks okay. Do a reboot or two just to be sure and so...
The final score:
TEXAST's: 3
Crapware writers: 0
That's zero, zilch, nada, null, nothing....Game over - Thank you for playing! Fuckers...

Did I mention some days I really hate Windoze...*sigh*

When I told them what I usually got paid for this type of service, I think they about crapped in their pants! Ivan says he and Nancy are taking me out to dinner next weekend. To The Monument Inn! Been years since I've been in that place. What a treat!.

And Nancy. Oh Nancy, bless her talented, big ol' heart had me pick out a piece of her artwork as payment. I tried to decline, but Ivan said she'd be pissed if I didn't take something. So I had it narrowed down to two. An oil and a print. And she said the hell with it, just take them both. I was speechless. And that doesn't happen very often! *grins*. So here they are...A couple of landscape studies featuring old buildings somewhere in Texas. 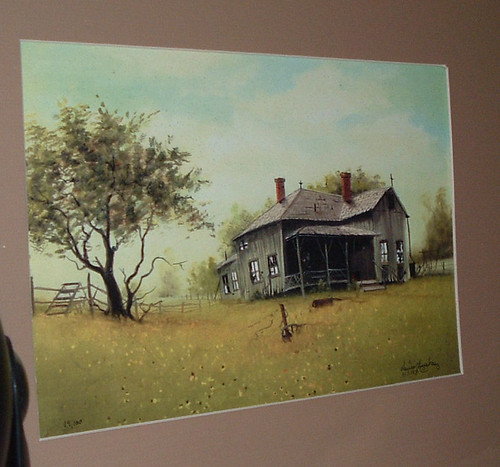 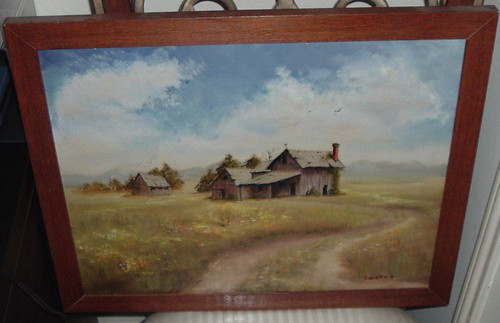 Excuse the lousy perspective, but these were the best of a bunch (A Bunch!) of pictures. My meager skills or cheap camera don't do either of these pieces justice. Nevertheless here they are. Go to my flickr page for the original photos.

It was soooooooooooooo good to hang with you guys for a while. Thanks for welcoming me back into your lives and your home! You didn't have to do that, and I'm grateful! Just goes to show what great folks you really are!
Thanks again, Ma and Pop!


By the way...Did I mention some days I really hate Windoze...*sigh*

"He has all the virtues I dislike and none of the vices I admire." - Winston Churchill

"A modest little person, with much to be modest about." - Winston Churchill

"I have never killed a man, but I have read many obituaries with great pleasure." - Clarence Darrow

"He has never been known to use a word that might send a reader to the dictionary." - William Faulkner (about Ernest Hemingway)

"Thank you for sending me a copy of your book; I'll waste no time reading it." - Moses Hadas

"He can compress the most words into the smallest idea of any man I know." - Abraham Lincoln

"I've had a perfectly wonderful evening. But this wasn't it." - Groucho Marx

"I didn't attend the funeral, but I sent a nice letter saying I approved of it." - Mark Twain

"He has no enemies, but is intensely disliked by his friends." - Oscar Wilde

"I am enclosing two tickets to the first night of my new play, bring a friend... If you have one." - George Bernard Shaw to Winston Churchill

"I cannot possibly attend first night, will attend second... If there is one." - Winston Churchill, in reply.