While I was going through some stuff week before last, I found this ziplock baggie, It had a tarnished silver chain. A pin I used to wear at RenFaire (also heavily tarnished) A polished stone, which I think used to go with the chain. A small bag with assorted christmas lights, A webelos pin. A mini red swingline stapler (with staples). Assorted pens and a retractable mechanical pencil. (They all still work!)

I admit I have no idea where this stuff came from.

Tempted to get the film developed though. The other stuff? Already put away.

That’s a shot of the Beach @ Gulfport, Mississippi. Behind me across the road though? Couple of dead cars, the skeleton of a house or two , and tow of those squat, ugly FEMA trailers.

Sure is a pretty beach though.

So LJ...What is your background picture?

These are mine. This one is on my widescreen: 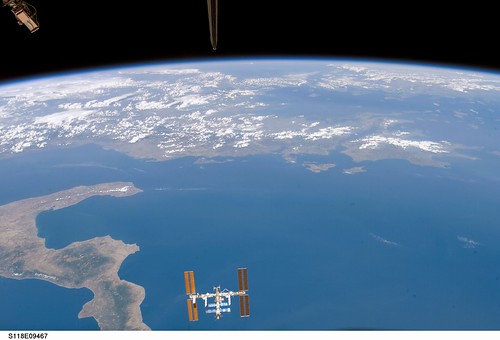 And this one is on my laptop: 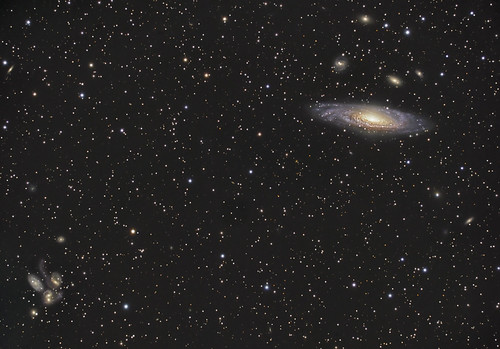 I freely admit to changing them often.

Gonna try to get caught with the cools stuff I’ve seen in the last week or so.

was dumbstruck. And how often does that happen. *grins*.

I chose to drive over through Louisiana via I-10, from Slidell to the Texas border rather than backtrack to I-12 as most folks do. It had been quite sometime since I had been to The Big Easy, and I was curious as to what was left of Katrina’s wrath that was visited upon this ancient (By American standards, anyway) city. After talking to a friend via telephone who assured me traffic shouldn’t be too bad, it was Sunday and the Saints were playing on Monday, I took to the road.

y the way storm damage is readily apparent in Slidell, as well. A lot of abandoned homes. It was obvious that some of these places were completely submerged. Also a lot of new construction underway. Just like down at the beach in Mississippi.

ew Orleans has always seemed to me to offer the best and indeed the worst of America. And we love it. It is a gritty, old city that sits too low and too close to the Gulf of Mexico for it’s own good.

Traffic was thick but not too bad. But what is it with you folk that insist on doing the speed limit (or below) in the leftmost lane and just sit there so the rest of us have to take our (and yours too) lives in our hands to get around you. Saw this on the whole drive, but is was categorically worse in Mississippi, and Lousiana.

t some point relatively early on the journey I passed by an overpass.

...It was festooned with all manner of memorials. I dunno if it was storm related or just a random car accident or two. But it would seem to me to be too much stuff for that. It was a glorious display of humanity’s regret for the past and things beyond the petty control of humans as well as hope for the future. There were wreaths, candles, plaques, memorials of all kinds set among the detritus of storm remains. I didn’t stop to take a picture (I was on a freeway) and I didn’t think I could do it justice anyway. Let the dead be dead and the let living mourn them in their own way. This wasn’t the last such display I saw along the way, either. But it probably was the best one.

s I got closer to the city, it was becoming obvious to me that whatever Federal, State, and Local governments and private and public organizations were doing, It ain’t enough people! It is appalling some of the things I’ve seen. Semi destroyed homes and commercial buildings that should have been cleaned up long ago. FEMA trailers galore. Apartment buildings with people living in them that should have been torn down! Destitute folk everywhere. (of course you can see those folk anywhere) Homes that need to be scrapped. And either given a “Do Over” card or a Get Out of the City Free Card. I understand they had to move around 28,000 vehicles that were simply abandoned.

don’t think you can maneuver too far in the city (or that area, for that matter) without seeing reminders of that terrible event and the failure of the government at all levels to deliver succor and comfort to those folks that really need it.

e have failed those fine people and their fair city.

I am not one to agree with celebrities, normally. I don’t usually give two shits what comes out of their mouths. But Brad Pitt is right...

Edit: Coincidentally TWC is showing a Storm Stories about the Aftermath of that bitch: Katrina..

Need to light your path in the dark? Blaze a trail through the house in utter darkness? Read abook at night? A map in the car. Then maybe the 4 (count them FOUR!) LED lighted baseball cap is for you! From Go Fast and Light

Our Advanced LED cap offering is perfect for Hunting, Fishing, or Camping, as well as Walking The Dog, Grilling, or working on home improvement projects. Wherever you need light, but want to keep your hands free, this hat delivers on it’s promise of being the “Ultimate Hands Free Flashlight”.

Why is this one Advanced ?

* LEDs are spaced to provide a wider beam of illumination.

* One size fits all - with adjustable Velcro strap.

* 4 LEDs total are hidden in the brim, so no one knows your hat is special until you turn them on.

* 2 GREEN LEDS provide light at night while preserving your night vision (pupils don't constrict), you don't suffer temporary night blindness when they are turned off.

* Animals are less sensitive to the green wavelengths, and are less likely to be spooked when you use the Green LEDs

* 2 Ultra Bright White LEDs provide light for up to 30 feet for trekking through the woods or close up for grilling, home repair projects, or reading books or maps.

* Dual Battery Packs - 2 Sets of coin size batteries - doubles the battery time(one pack for the green and one pack for the white) and provide 30+ hours of battery. They can be changed out in seconds with no tools needed. * Hidden Push Button Switch allows you to utilize 3 different lighting configurations:

Order one for yourself and buy a few extra to give as gifts to friends and family (otherwise they may “borrow” yours!!!)

Via The Houston Chronicle Gift Guide

Of course I don't think I'd take this one swimming. Water resistant indeed. Sold out for Christmas though. Oh yeah and they have one in white.

And no it ain't a solicitation. I hardly ever wear caps anymore. Just an effort by me to bring you the high quality posts you deserve!

Edit: They have some other pretty cool stuff on that site as well: http://gofastandlight.com/

Most people know that celery has negative calories. But there is a bunch of stuff here from the bootstrapper blog (via businesscreditcards.com that was news to me!

Read on:
Negative Calorie Foods: 15 Foods That Actually Burn More Calories Than They Contain
Friday, December 7, 2007 at 1:36am by admin

No, we’re not advocating the battle to see how few calories you can consume each day or promoting crash diets in any form or function; however, if you’re a snack-o-holic who can’t stop munching and crunching in between meals, try snacking on one of these negative calorie foods instead of gobbling down a cupcake or big bag of chips. Your body can burn more calories just by chewing and processing the snack than the food contains already. In other words, you’ll be able to keep eating throughout the day without packing on extra pounds.

1. Celery: A staple on most party veggie trays, celery (without the ranch dressing) is a crispy snack that you can enjoy without worrying about taking in any calories. It is high in sugar and sodium, but still much healthier than pigging out on brownies or salty peanuts.

2. Oranges: Before you leave for work in the morning, toss an orange into your bag for a mid-morning or late afternoon snack. An orange typically contains only 45 calories, so feel free to eat the whole thing!

3. Strawberries: Strawberries are a popular negative calorie food because of their natural sweetness and juiciness. Sprinkle a few on your breakfast cereal to give your metabolism an extra jumpstart early in the day.

4. Tangerines: A smaller, more tart version of the orange, tangerines are another negative calorie food that’s both tasty and portable. Enjoy one or two for a snack throughout the day to stimulate your taste buds without having to dig through the candy drawer.

5. Grapefruit: As big as it is, grapefruit –without the extra sugar on top– is a surprisingly negative calorie food. One-half of a grapefruit only contains 36 calories but a whopping 78% of your daily value of potassium.

6. Carrots: Carrots don’t just make your eyes sparkle; they also let you snack guilt-free. Snack on baby carrots instead of chips and salsa while you make dinner, or keep a bag in your office refrigerator when you feel the need to eat due to stress.

7. Apricots: Indulge in nutrient-rich apricots for a sweet snack with negative calories. Your higher metabolism and thinning waistline will thank you.

8. Lettuce: There’s a dirty little rumor in the magazine industry that the girls at Vogue keep lettuce in their desks to snack on when the hunger pains strike, but they can’t afford to compromise their stick thin figures. We’re guessing you’re not about to go through the day dizzy with starvation, but you can make yourself a hearty salad with lots of lettuce (and other negative calorie veggies!) once you get home. Don’t forget to take it easy on the dressing.

9. Tomatoes: Chop up a tomato to give your sandwich, salad or egg whites omelet extra flavor without adding any calories.

10. Cucumbers: Your salad can’t survive on lettuce alone. Cucumbers are another negative calorie food that are great for crunching on when your mouth is getting bored. Check here for tips on growing your own cucumbers.

11. Watermelon: A traditional summertime treat, enjoying a watermelon is almost fun and delicious as eating candy because of its super sweet, super juicy nature. Plus, you’ll burn off all the calories crunching, digesting, and of course, spitting out the seeds.

12. Cauliflower: Another party platter vegetable, raw cauliflower is naturally low in fat and of course, calories, so don’t be shy about piling up your cocktail napkin.

13. Apples: An apple a day keeps the doctor away, but when eaten as a snack instead of candy bars or chips, apples will also keep the calories at bay. With only 81 calories per apple, your body also works a lot harder and longer to digest the fruit many other snack options.

14. Hot Chili Peppers: Excess seasonings and dressings pile on lots of fat and calories to otherwise healthy meals. To avoid gaining weight simply because you’re a condiments junkie, experiment with more natural seasonings like hot chili peppers, which is a negative calorie food.

15. Zucchini: Zucchini is a versatile, negative calorie food that can be baked, steamed, fried (not recommended), or prepared in many other ways. With just 15 calories per 100g, make zucchini your new diet staple.

Implementing negative calorie foods into your daily diet doesn’t just help you lose weight by cutting calories; it also speeds up your metabolism and introduces healthier items like fruits and vegetables into your regular food choices and favorite recipes. So no matter how you look at it, you’ll come out ahead.