Got one for The Offspring too. What is a Moleskine notebook you ask? Well read on... 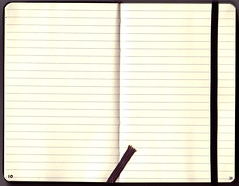 Moleskine (pronounced /mɔleˈskine/) is a brand of notebook manufactured by Moleskine (Modo Et Modo, an Italian company. Although the name alludes otherwise, the notebook is not bound in moleskin, but instead in oilcloth-covered cardboard. Other distinct features also include an elastic band to hold the notebook closed and a sewn spine that allows it to lie flat when opened.
The modern Moleskine is fashioned after Bruce Chatwin’s descriptions of the notebooks he used and is not a direct descendant of the original moleskine. Chatwin used similar notebooks constantly throughout his travels, and wrote about them glowingly. His original source of notebooks dried up in 1986, when his Paris stationer informed him that the last moleskin manufacturer, a small family-run firm of Tours, had discontinued production in 1986 after the death of the owner.

Pablo Piccasso, Ernest Hemingway, just to name a couple that have carried moleskine's.

SEIZING REALITY IN MOVEMENT, STOPPING TIME, CAPTURING DETAILS. MOLESKINE ACCUMULATES EMOTIONS TO RELEASE THEIR ENERGY GRADUALLY OVER TIME. HERE ARE THE TALES OF THOSE WHO HAVE MADE IT A LEGEND. 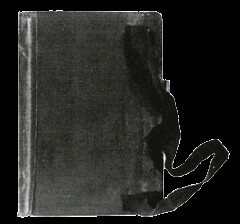 
This entry was composed in mine while I was at lunch after shopping today.
I am thinking of going back to a paper planner. I don't need anything fancy.  None of that 7 habits or GTD bullshit. Been through the training for both when they were in the corporate vogue. And they still are for the most part.

Just a page for a week or summat like that. A page for a day seems kind of wasteful. Why would s geek go back to a paper planner?...*Shudder* seems like a waste of resources.

But I have several reasons and they seem reasonable to me (Well they would, wouldn't they?):


Plus there is the feeling you get from holding the thing in your hands. Writing the entries. Reading something you've written. Bad handwriting or no. *grins* This was my reasoning behind buying the notebook today.  Just to see if I like it.

And it takes a couple of commitments too:

I'm not going completely back to paper. I AM a geek after all.Got a pretty good system going of emailing my corporate Bullshit to my personal email. The it automatically enters it into my calendar in a category I made up specifically for work related stuff.

Oh and I got mine at Barnes and Noble.