In all things be a master
Of what you do and say and think.
Be free.
Are you quiet? Quieten your body.
Quieten your mind.
By your own efforts
Waken yourself, watch,
And live joyfully.
Follow the truth of the way.
Reflect upon it.
Make it your own.
Live it.
It will always sustain you.

- Buddha from the Dhammapada

Hope you find some happiness and joy in The Fortress of Snarkitude. Happy birthday young man! I have had the most pleasant weekend here with The Canadians. They really have spoiled me this weekend. Got here Friday after work in the late afternoon.

This time I had sense enough to bring all the stuff that let's me be me...CPAP machine, meds, camera, iPod, laptop. Various toiletries. Swim trunks, a couple of changes of clothes. I was prepared. Seems it takes a lot of gear for me to be comfortable. *grins*

Had a few drinks and then dinner. Roast beef hoagies with all the trimmings. (horse radish too! Yum...) Fries and a salad. Magill had been slow roasting the beef all day it seemed. Man, was dinner delish!

Brought my dlo iPod speakers and set those up, so we would have some tunes. And did we. These little speakers performed admirably all weekend. We even took them down to the pool last night. Not loud enough to run any one off, but enough to contribute to the all over ambience of the night. The plans for Saturday were to go to Fry's Electronics and pick up some new stereo equipment and a memory upgrade for their computer. The stereo these guys had, was destroyed in the move down from Calgary. They had been waiting for a check from the insurance company to go shopping for a new CD Player and AV Amp. 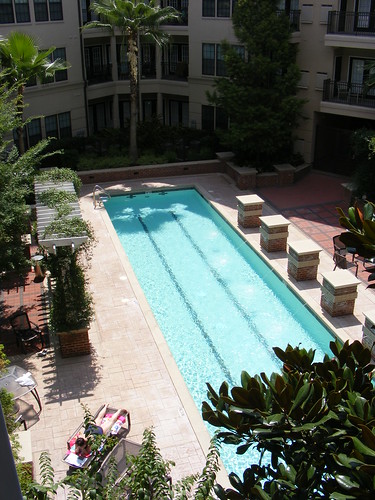 These guys are so easy going. I like it here! We talk about all kinds of stuff. After dinner and a few more drinks, we mosey on down to the lap pool. Ahhhh! I had forgotten how much I love to swim. Or even just float in a pool of water.

At one point, I had all of me submerged except for my eyes (or head) and my belly. *Break out the Harpoons!* Just floating along looking up into the night sky. Various cloud formations marched or strolled across the sky as I floated up and down the pool. My little version of heaven. The lap pool had these fountains or raised jets pouring water into the pool and it was just like getting shoulder, neck and face massage while standing under them. Greatness!

Round eleven or so we trooped back up to the apt. A few more drinks and a little smoke and I was basically all in. I staggered off to bed.

Next morning I arose fairly early. A few cups of coffee and then Magill and I were off for the days missions! First stop was the electronics components section of Fry's to pick up 4 GB of RAM for the computer. Got a really helpful guy to write it up and then I decided we needed an inexpensive but fast router. I *hate* not having wireless.

At the apartment my laptop can *see* un protected networks and will only connect intermittently. Can't have that. You *know* how I am.

Got one for $39 and Mr. Helpful put it on our memory bill. He even split the memory purchase into two tickets so we could double the $30. MAIL IN REBATE. FTW!

Next stop - Audio Department. If we had Mr. Helpful on the other side of the store, we had his evil twin on the other side. Guy didn't want to help any one if they weren't spending $5K or more...The Sony Amp we wanted wasn't in stock, but we did score a nice CD changer that holds 400 (FOUR HUNDRED, I said!) They call it a CD changer. I call it a Juke Box!

Next stop was a Best Buy to see if they had the Amp in stock. They didn't, but they had the next model up the foodchain, and it looked like it was the LAST one! Same price too! SCORE!

Back to the apt. Got our loot in the front door and started opening boxes. Got the RAM into the PC in short order and watched Magill try to figure out where he was gonna put everything. Then I did my thing with the router. Had to re route some wireage and plugage to get every body to work together. But twere done in short order so I could watch Magill some more. 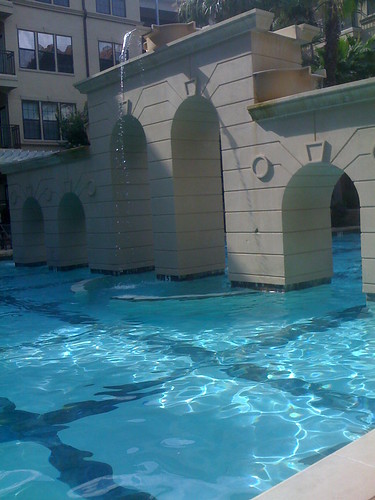 Sammiches for lunch. After that took off with Susie to get a propane canister for the grill. Then was Pool time. We went to the big pool and oh my, there was some nice scenery down there(!) and after that ~ Drinks and dinner. Steak (with grilled onions and jalapenos) tacos and shrimp (or Prawns as the Calgaricans called them), some yummy guac. Ammaretto for dessert. And then More amaretto.


While we were sitting on the porch smoking and talking at about dusk last night, this swarm of bats came by looking for food! Then another. and another. Must have been a few hundred of them all together. So cool...Then later on another dip in the lap pool. With music and beer...

Back up to the apartment later. Saw his sign in the elevator: 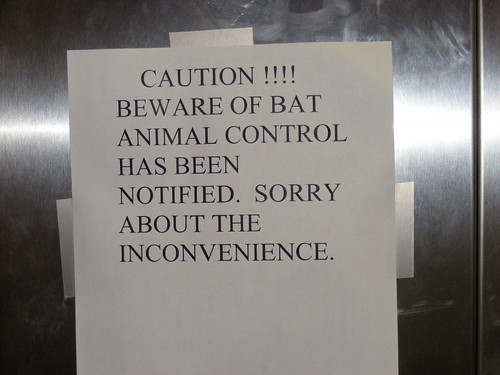 We did wonder where the colony was located. Maybe in the elevator shaft? I wouldn't think so...

When I spilled my Bailley's on my shorts I knew it was time for bed.

Slept fairly good. Woke up first. Started going through their CD's to see if they had some music, I couldn't live without. (They did) Reckon I ripped about 10 or 12 CD's today.

Every one except Susie-Q was moving pretty slowly today. Till I had some coffee and food. Then I was just fine.

Mostly packed and nearly ready to go. Think I'll skeedaddle before they kick me out.

Oh and I talked to The Offspring today. We'll have dinner after work tomorrow for Father's Day.

So that was my weekend...How was yours?
Collapse