❝Do not believe that he who seeks to comfort you lives untroubled among the simple and quiet words that sometimes do you good. His life has much difficulty... Were it otherwise he would never have been able to find those words.❞

Curvy roads in Houston that are fun to drive on (releatively) safely (c'mon! I drive a 5 speed Saturn sedan for cryin' out loud!) are few and far between. You know the kind of roads I mean...The kind that are fun to drive on with a standard transmission. That have a few turns that make you lean into them and downshift then lead into a good straightaway that lets you dump the clutch and open it up just a little. And repeat. A few times.

FM 1464 that runs between Katy and Sugarland was one of those (or was) a few years ago. I wrecked a Ford Explorer on that road over a decade ago. Not one of my finer moments.

Decided to give it a go a few days ago, when I was on my way to somewhere else on the other side of Sugarland. I was tired of the sanitized views (and drives) of the ubiquitous freeways that take us from one place to another. For you Houstonians FM1464 runs between Westheimer (Way out west) and Highway 90 in Sugarland.

This country road used to be a fun drive. Used to be. Lots of construction traffic along the roadway. I can usually get around that stuff! *grins*

Serious suburban sprawl along the damned thing. Development after development. What ever bare spaces there is, are currently slated for construction. Either commercial or residential. All this right next to a state prison too. Were we that hard up for housing in Fort Bend County? Still relatively safe living next to a prison, though. You think anyone that escapes is gonna want to hang around the area? Hell no!

And too many damned stoplights. Too. Many. Stoplights. I don't think I made it up past fifty the whole drive...Used to S-C-R-E-A-M through there in my Z28.

padiwack posted a few pics of this nature. At any rate this sent me off for a search as I thought I had taken a few of these works of art at maker Faire in Austin last October.. Apparently I only got one: 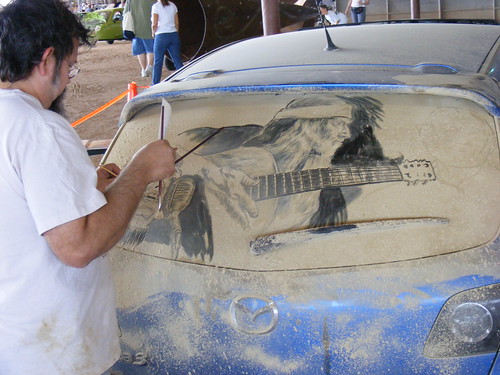 But the rest of the pictures I uploaded from that trip are here: Maker Faire Set October 2007. This was a pretty fun event. Hotter than hell that day, but nothing insurmountable. Next time I want to go for the whole show though...
Collapse