Instructions: BOLD each answer if you agree with the statement.
My answers are in BOLD.

I am 5'4 or shorter.
I think I'm ugly. (fat, not ugly)
I have many scars.
I tan easily.
I wish my hair was a different color.
I have friends who have never seen my natural hair color.
I have a tattoo.
I am self-conscious about my appearance.
I have/I've had braces.
I wear glasses.
I'd get plastic surgery if it were 100% safe, free, scar-free.
I've been told I'm attractive by a complete stranger.
I have had more than 2 piercings.
I have had piercings in places besides my ears.
I have freckles.

I've sworn at my parents.
I've run away from home.
I've been kicked out of the house.
My biological parents are together.
I have a sibling less than one year old.
I want to have kids someday.
I have children.
I've lost a child.

I've slipped out a "LOL" in a spoken conversation.
Disney movies still make me cry.
I've snorted while laughing.
I've laughed so hard I've cried.
I've glued my hand to something.
I've laughed till some kind of beverage came out of my nose.
I've had my trousers rip in public.

I was born with a disease/impairment.
I've had stitches.
I've broken a bone. Mine and someone else's..
I've sat in a doctor's office with a friend.
I've had my wisdom teeth removed.
I've had serious surgery.
I've had chicken pox.

I'm single.
I'm in a relationship.
I'm available.
I'm engaged.
I'm married. (But not really)
I've gone on a blind date.
I've been the dumpee more than the dumper.
I have a fear of abandonment.
I've been divorced.
I've had feelings for someone who didn't have them back.
I've told someone I loved them when I didn't.
I've told someone I didn't love them when I did.
I've kept something from a past relationship.

I've done something I promised someone else I wouldn't.
I've done something I promised myself I wouldn't.
I have lied to my parents about where I am.
I am keeping a secret from the world.
I've cheated while playing a game.
I've cheated on a test.
I've driven through a red light.
I've been suspended from school.
I've witnessed a crime. (hell, I've committed them!)
I've been in a fist fight.
I've been arrested.
I've shoplifted.

I've consumed alcohol.
I smoke cigarettes.
I smoked pot.
I regularly drink.
I've taken painkillers when I didn't need them.
I take cough medication when I'm not sick.
I've done hard drugs.
I've been addicted to an illegal substance.
I can't swallow pills.
I can swallow about 5 pills at a time with no problem. (and no water)

I have been diagnosed with depression. (dysthymia, i.e., "depression lite")
I shut others out when I'm depressed.
I take/have taken anti-depressants.
I have had an eating disorder.
I've slept an entire day when I didn't need it.
I've hurt myself on purpose.
I'm addicted to self harm.
I've woken up crying.

I can sing well. (Well I think I can)
I've stolen a tray from a fast food restaurant.
I open up to others too easily.
I watch the news.
I don't kill bugs.
I hate hearing songs that sacrifice meaning for sake of being able to rhyme.
I fucking swear regularly.
I am a morning person.
I paid for my mobile phone ring tone. (Which one?)
I'm a snob about grammar. (That's part of my job)
I am a sports fanatic.
I play with my hair.
I have/had "x"s in my screen name.
I love being neat.
I love Spam.
I've copied more than 30 CD's in a day.
I bake well.
I know how to shoot a gun.
I am in love with love.
I am guilty of tYpInG lIkE tHiS.
I laugh at my own jokes.
I eat fast food weekly.
I believe in ghosts.
I am online 24/7, even as an away message.
I can't sleep if there is a spider in the room.
I am really ticklish.
I love white chocolate.
I bite my nails.
I play video games.
I'm good at remembering faces.
I'm good at remembering names.
I'm good at remembering dates.
I have no idea what I want to do for the rest of my life.
My answers are totally honest.

Oh shit...If any of y'all need to de-friend me because of my answers ~ Well I reckon you were going to sooner or later anyway!

femspectre
Six-Word Story
Hemingway was once challenged to write a story in only six words. His response? “For sale: baby shoes, never worn.” He is believed to have called it his greatest literary work ever. Can you write a story in six words?
Reply 270
You say you love me...But... 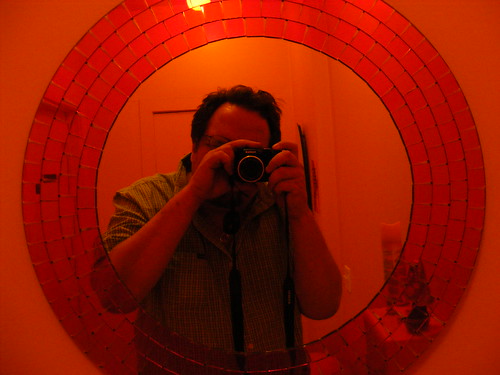 Of course you cannot see it but I AM smiling behind the camera!
Picture was taken this year at the 1st Annual (we hope) Houston Fringe Festival

Posted with tongue in cheek! 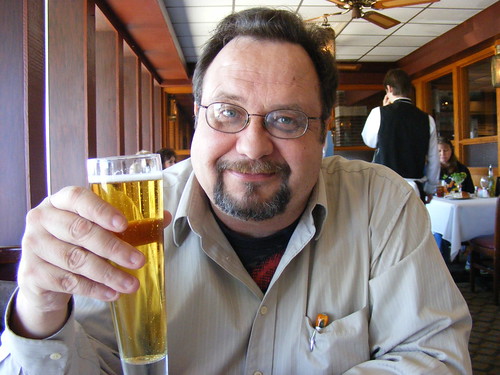 Taken on my half century day this year at Gaido's in Galveston, Texas, by The Offspring!
Collapse