Went to The Canadians last night for dinner and to watch the debate. Didn't plan to spend the night so I didn't take "The Darth Vader Machine" with me. 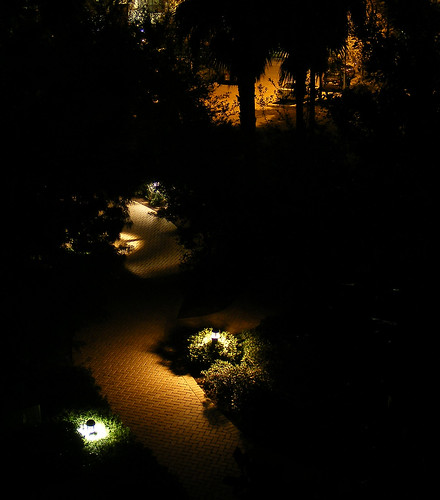 The debate was pretty unispiring. If I hadn't decided long ago who I WASN'T going to vote for, I would have been pretty disappointed. Hell, I WAS pretty disappointed! Pretty cool to get the perspective from some one from over the Northern border though.

McC was looking old and grumpified. Though he was gonna lose it once or twice there, but no. Obama came across as pretty smartly presidential in my opinion. But nothing new from either of them, no fireworks.

Would have been more exciting to watch paint dry. I think the damned commentary after the actual debate was as banal as usual. How do you punch something like that up? They kept trying o make it sound like a boxing match or something. Far from it fellas. Oh and memo to Pat Buchannon ~ Fucking retire already. Your views are nearly as old and out of date as McC's. Jeebus.

But I had a couple of beers and dinner and spirited conversation with some friends, so it was not a waste of time. 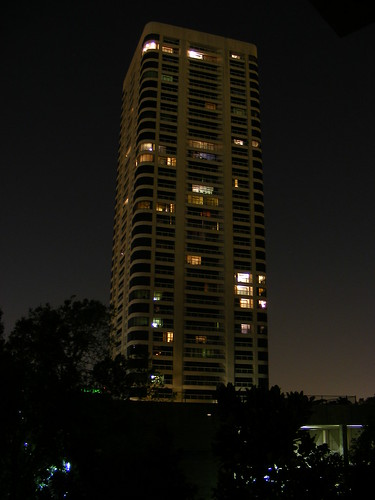 After I couldn't take any more punditry, I stepped out to the car and got my camera and tripod as I wanted to try taking some long time exposures from their balcony.

So I set the exposure for 4 seconds (the max on my camera), mounted the camera on the tripod and set a 2 second delay on the shutter so I wouldn't move the tripod or camera when I pressed the button. These were taken with no flash and I have not modified them in any way other than a rotation or crop where needed.

Probably took 60 pictures or so. 25 made it out of the camera. The ones that made it up to flickr look pretty good to me. At any rate give my Night Time Shots Photos a look! Feedback is always appreciated.

Susie-Q said I really nailed it on the two night photos in this post. I think I "nailed it" on the entire set. But that's just my opinion. She really liked the High rise photo. The other is a path that is down a bit from their balcony. Check out the shadows and interplay of light on that one.

Oh and today's header photograph is brought to you by the letters "H" and "I"! I'll give you three guesses what they stand for and the first two don't count!

The photo itself was taken on Louisiana Street in downtown Houston this week. The caption is well...Well it is how I was feeling this week. 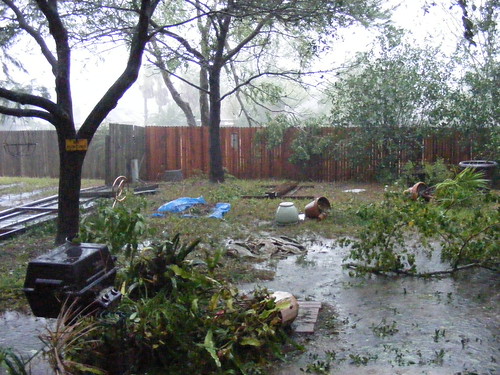 The pictures I've taken that I felt were Ike related are in this set (including the DT photos I've shot this week): Ike Photos

Here's a set of 28 images from Hurricane Ike:
http://www.boston.com/bigpicture/2008/09/the_short_but_eventful_life_of.html

Another pleasant experience at The Apple Store ™.

I noticed the power brick for my laptop was getting really hot this afternoon. The damned thing was so hot you couldn't hold it in your hand for too long. I thought this was some unusual behavior for a power supply...

So this evening I took a ride to the mall at Memorial City and strolled into the store with the brick dangling from my hand. The girl at the front of the store got some sales dude's attention and he went and picked out the box for me and asked me if I was, "paying by cash or charge."

"This should be covered under my Apple Care Agreement. You cannot even hold the thing it gets so hot."

"Uhhh ~ You'll have to go through the Genius Bar to see about that, sir..." We walked to the back of the store. Sales guy tried to explain what I wanted looking doubtfully at one of the guys behind the bar. One of the Geniuses (That's what they are called. Really!) behind the bar conferred with another opened the box and traded me a new brick for my old one. Cool!

They never even asked me about my Apple Care Agreement. Sweet!

There was a guy trying to return one of these Griffin iTrips. You can hook your iPhone (or iPod) up to the thing and it will play your music or Pod casts through the iPod app via FM through your car stereo. He was complaining he could not get the audio from youTube videos to play through his car stereo. The genius seemed a little baffled as to how to deal with this fella.

I turned to the guy and told him, "The YouTube App will not play through the car stereo becaue it doesn't go through the iPod App. To play through your car stereo you have to use the iPod Software on the phone. Just the way the dock connector works. Now if you have an AUX in port on your car stereo you could do it that way, but if you try to use the dock connector it is a no go." Both the customer and the Genius looked at me with their mouths open.

Another Genius from down the bar said, "The man knows his stuff, that's right."

I grinned in his direction and turned to the customer and said, because I couldn't help myself, "I wouldn't recommend watching youtube video if you are driving, though." because he looked like the type that would. With that I turned and strolled out of the store, having done my good deed for the day.

You reckon one day I'm gonna have to work in an Apple Store ™, eh?

And I didn't Spend a friggin' dime in there...FTW!
Collapse