A Friending Frenzy! Go over and introduce yourselves. Tell him

He is a seriously nice fellow! Presume a lot of his friends (including me!) are too!

Xbox live? Or whatever the other majors have going for them? What are the advantages (besides that whole MMMORG experience)?

What are your favorite games at the moment? What makes it so?

The reason I ask is this: Over the holidaze I was gifted with an XBox 360. He or they, had decided to go to a Sony PS of some sort. Now I really like this thing. They also had a bunch of games which I went ahead and bought from them for a nimonal fee. So I've had a gaming frenzy thing going on trying to catch up. I haven't hookrd it up to my network (and thusly the interwebs) yet. But I have a strong suspision that this $99.00 expense will be happening soon.

So I've got games on the Mac and now a 360! I suspect gaming on my Mac will evaporate except on roadtrips. Currently have the thing (360) hooked up to my 22" widescreen monitor in my office via a VGA cable. The LCD has 2 connections so it is sharing the connections with my MacBookPro. The widescreen thing works really well for the 360, albiet only in VGA. But hey! It is a better picture than the one on the TV in my Bedroom! FTW!

Yeah I know there are cables every where. Gimme a minute. I just got this setup yesterday!

We had no other plumbing issues of any kind over the weekend! YAY!

I have been enjoying immensely being off today (and for the last 5 days) because being home today has let me catch up with y'all!

Oh and for those of you that think all I ever try to do in pictures is look like a badass, these are for YOU: 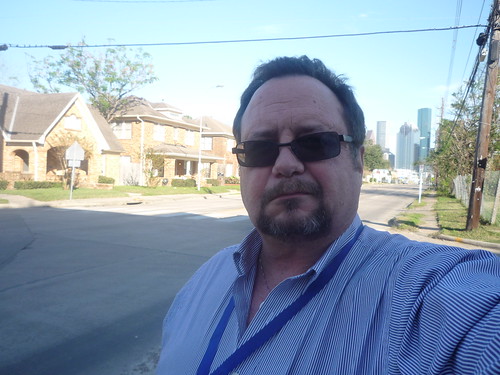