I wanted to get online with my Xbox 360. And I also wanted a *WIRED* connection for my MacBookPro. As most folks know a wired Ethernet connection is faster than most (if not all) WiFi connections.

So a little research time and I figure I want a "Gigabit" switch. Gigabit is the latest Ethernet standard. Supposed to be blazing fast. Now I knew that the MBP and my Airport Extreme router are both capable of Giga speeds so...

Of course if your Internet connection isn't...You are building for the future when it is...Sadly mine isn't. But hey! I'm investing in the future right?

A trip to Fry's was in order...Over to the networking section...So many choices! 4, 5, 8 port switches (and much, much more) are my choices for now.

I decide on a box with 8 ports. Why? Because I'm investing in the future of course!

Which one did I buy? A Netgear ProSafe ™ 8 port Gigabit Desktop Switch.

I find a sales guy and ask a few questions such as:
Will this work with an XBox?
Can I hook it up a certain way I have in mind and will this work? (*heh* More on this later).

Answers are yes and yes, because of course, the ports are bi-directional and it does not matter in which order they are plugged into the switch.

That said, I have him get me a couple of cables (14 feet) write my ticket up and go on my merry way. I don't really trust his answer to my last question but if it doesn't work, I'll bring it back and either get a refund or an exchange of some kind. I know relatively little about this kind of stuff other than what I've soaked up just from being around it.

My initial thought was that everything hooked up in parallel should work because the ports are bi-directional: 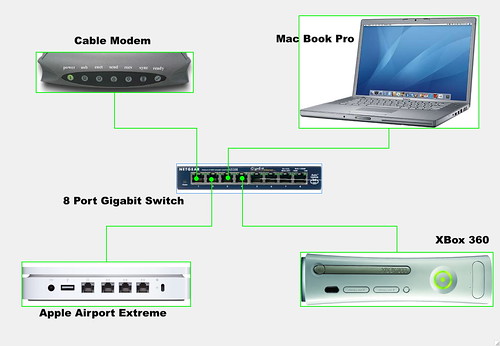 And it did. Mostly. Wireless still worked. We still had Internet. And the the Mac Book Pro and the Airport Extreme router were pounding along at 1000 Mbps. The cable modem unfortunately, seems to be running between 100 - 1000. Closer to the lower end I think. Even the XBox is doing 100 Mbps.This is almost better than I hoped for! It was easy peasy to set up. And everything seems to be rolling right along.

Except for one small, eentsy, teensy problem. *sigh*

The XBox wouldna connect to the interwebs. So no XBox Live, which was kinda the point of the whole thing. That and I wanted a faster connection when I was sitting here at my desk. Of course THAT was working...Sooooooooo... 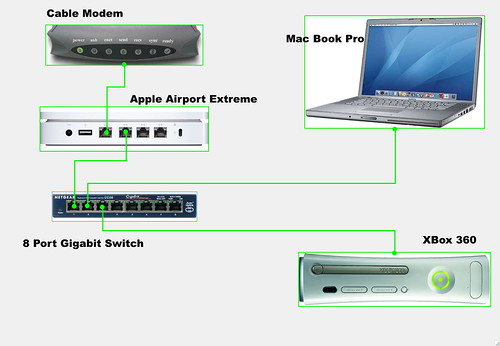 The Router needed to be between the modem and the switch. Why? Well there is a certain in line kind of logivc too it. And it works.

But now I need to do one of my least favorite things. Kinda, sorta hide the cable. Why?

Well, the cable modem and the 8 port switch are on one side of the room and the router is on the other side of the room. Put the router over there because I was catching some kind of interference from the neighbor's (I think)...Once I moved it to an inside wall, I was good to go.

So what does this mean? Well it means that between the cable modem and the router there is about 25 feet of cable. And between the router and the switch as well. I'll run it along the baseboards of the walls in here and snake it up and over the dorrway(s). I can't really run them together because the cables are just too thick and will look kind of funky. Al though I think I could run the cables on either side of the same doorway without too much crap from youknowwho... Not to mention myself...

This was one of the easiest hardware installs I've ever done.

Probably should invest in one of those VPN gateways. But I'm not really sure.

So nitrous oxide at the dentist this afternoon. I'm kind of meh about it. Didn't make laugh. Or feel stupid. For the longest I wondered if it did anything at all fir me. I might have been a little more relaxed. Maybe they didn't give me enough. *grins*

Go back in two weeks for a cleaning and then the week after that for the real crown.

Since I stopped smoking (24 days ago. Woot!) I don't seem to be dealing with asthma type symptoms on a daily basis like I was before I even got sick.

I still get short of breath. But not to as great an extent as I did when I was actively smoking.