I met The Offspring and BF for lunch yesterday at this little hole in the wall Mexican Restaurant. So I could give her my old point and shoot Digicam. After that the little group broke up and she and I went to First Saturday Arts, over on West 19th Street. It was a smallish little art fair. Some interesting characters. And more than one person asked me if I was from the Media. Had to laugh. Had my lkiller camera bag with me and the D60 slung over one shoulder, if it wasn't in my hand *grins*. One fella gave me his card and asked if I got anything decent of his stuff ( he was selling some pretty cool stoneware and pottery) would I send him copies as he had just started a blog and wanted to put some pictures up. I told him that if I did I would surely send him copies via email.

Dunno how the pics came out yet as they are still in the camera. I'm sure I got some good ones though. *winks*

From there Em and I strolled further down 19th Street just happily snapping off pictures. Stopped at a coffee shop where I got a iced latte and she got and ice cream cone with mango *bleh* ice cream. Soon it was time for me to drop her off at the hair dressers.

From there I cruised towards Downtown. Something going on down there they had a bunch of streets blocked off. Made getting where I wanted to go a bit of a challenge but not impossible. I pulled into Eleanor Tinsley Park so I could take some shots of downtown and what ever fauna they had put in this circular garden area (irises and some other native stuff) and there was this big steel sculpture there that had some interesting textures and other parts that had a nice patina on them.

Parking was at a premium but I managed to find a place at the end of the row. I got out and got the camera out of the trunk and strolled around and snapped a bunch of pictures off with my 55. People, plants and the buildings off away to the east and west.

Happened to look around at one point and saw this big ol' guy and his rather attractive companion park thire F150 in front of my car. Thought nothing of it right?

Went back to my car, got the bag and my tripod out of the car. Had a seat on a nearby bench to grab a smoke and change to the 200mm lens. Snapped a few off there. Nice telephoto. Not really good enough for wildlife though. (Figured this out while I was at Garner State Park last week and friend Richard the Photog confirmed it last night). Just not enough length to the thing.

So I plugged my headphones into the iPhone and started playing some tunes while I took a bunch more pictures. I moved to a little bit west of my car and took a few pictures of the AIG building (further west) and Buffalo Bayou off a little to the north. I also placed a call to The Canadians to see what was up?

Susie-Q was upset. Her FIL is on his last legs in British Columbia and apparently is being robbed bllind by Magill's sisters. The man probably has litterally days left to him. So I made a concerted effort to cheer her up while I took a few more pictures. Earphones with an inline mic are a wonderful thing.

I noticed the couple coming back from their walk. As they got closer they sped up. As he passed by me he asked if he could use my phone. I turned to look to see what was giving them a fit while IU said sure as soon as I got off the phone. Some one had smashed the windows out on the passenger side of the truck. A smash and grab. Damn! Signed off with the Cannuck and walked over to give the guy my phone so he could call 911.

Asked me where we were (!?!) while he was on the pghone with emergency services. And explained to them what had happened.

Barstard(s) got both the cell phones, her purse, his wallet and anything else the had of any value in the vehicle. They had locked the lot in the center console. Apparently the crook had used the same rock to crack the lock on that as he had to break the windows out.

Glad for once I drive an older Saturn that looks like ther would be nothing of any value in it.

I wished them luck as the cops pulled up and I pulled out. Damned criminals...

Then I cruised to Michele and Rich's to hang with those guys for a while and let Rich play with my camera.

To see if I can find some curtains to match the new bedding set I just bought at WalleyWorld.

IKEA on a weekend! What was I thinking?!?

Just look at this half of the parking lot! Then this is the place for you... 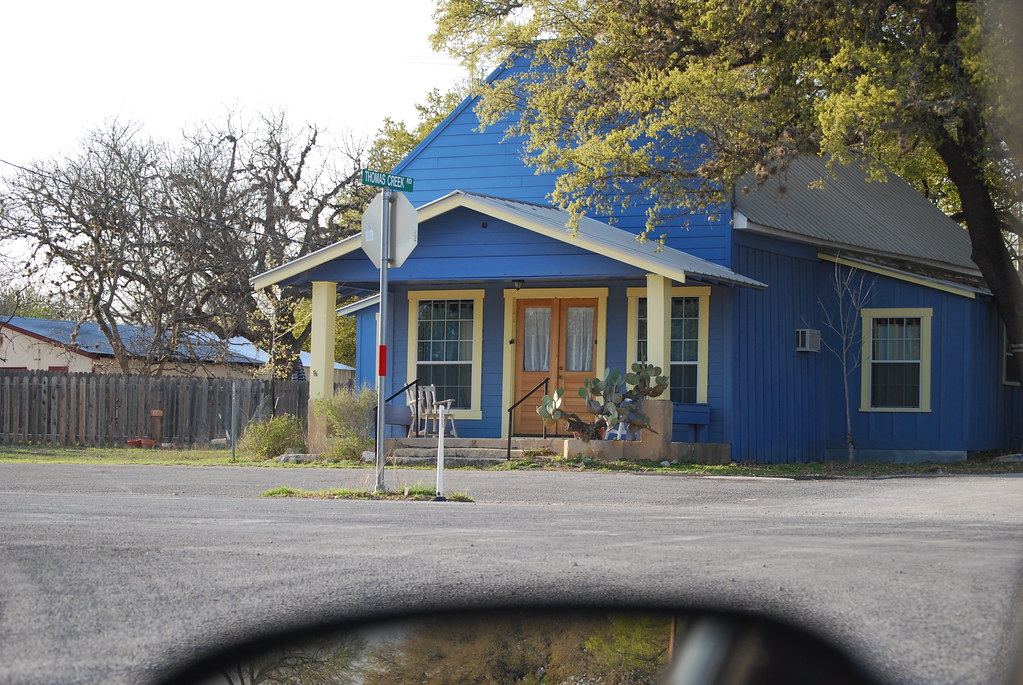 At the intersection of RR470 an RR462 in Tarpley, Texas. Photo taken after a minor course correction on my road trip west.


ETA: I just realized flickr has geo tagging so if you would like to know just where in the hell the middle of no where actually is click the picture and there's a link to the right for Tarpley, Texas

dr_rushfor introducing me to this album by The Decemberists...

You surprised me yet again, darlin'!

I'd be stuck in a musical desert if not for the suggestions of friends...Like you!
Collapse