Is putting a stranglehold on the bandwidth here...*grins*

Beautiful day yesterday...Got all kinds of pictures. Uploading the best of the best to flickr. There was some pretty cool stuff going on in the sky as far as clouds go...And an old rail station, couple of old bridges, derelict rails, some stuff at Lake Waxahachie. All in all very productive. as far as peectures go.

Downtown here has some really nice early 20th and late 19th century architecture that just blew me away. I'll be getting some pictures of that stuff as well before I get outta here. Very pleasant and I bet the faire is gonna be fun too. Little more subdues than TRF, but fun nonetheless.

tx_cronopio last night at a Mexican restaurant right down the street from my motel (hotel?). Always a pleasure to meet one of my LJ buds...Doesn't happen often enough.

She has the same voice in person as she does in her journal. Delightful!

We'll have lunch today at the faire when she gets a break.

How's about a little teaser: 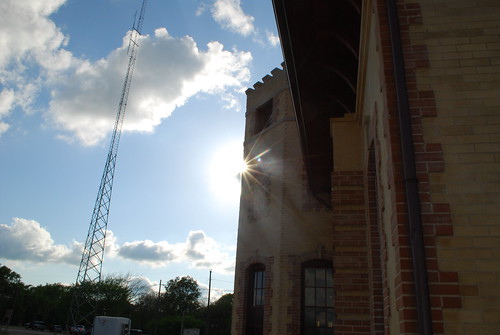 Taken just outside of DT Waxahachie.

I was so NOT ready for the fairs to be over today!

I cannot even tell you how many pictures I took today. I do know I have some tee-rific pictures in the camera though!!