A couple in their nineties are both having problems remembering things. During a checkup, the doctor tells them that they're physically okay, but they might want to start writing things down to help them remember. Later that night, while watching TV, the old man gets up from his chair. 'Want anything while I'm in the kitchen?' he asks.

'Will you get me a bowl of ice cream?'

'Don't you think you should write it down so you can remember it?' she asks.

'Well, I'd like some strawberries on top, too.  Maybe you should write it down, so's not to forget it?'

He says, 'I can remember that.  You want a bowl of ice cream with strawberries.'

'I'd also like whipped cream.  I'm certain you'll forget that, please write it down?' she asks.

Irritated, he says, 'I don't need to write it down, I can remember it! Ice cream with strawberries and whipped cream - I got it, for goodness sake!' Then he toddles into the kitchen.

After about 20 minutes, the old man returns from the kitchen and hands his wife a plate of bacon and eggs. She stares at the plate for a moment then says, 'Where's my toast?' 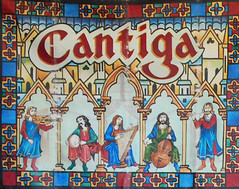 Something will come right up and smack you right in the ol' Schnozz!

I've talked before about the Magic of Renaissance faires and how I felt about them.

This group Cantiga for instance. They have been together for literally years. They have been playing renaissance faires for years as well. I love this group. Thier music gets me right were I need it most. My heart. Harp, Cello, tin whistle (or other recorder like instruments). There are others now, that I cannot even begin to name. All ancient stuff. They were just a trio when I was an avid fan. I cannot seem to locate their CD's or tapes that I bought from them at this point. I went through a tear trying to find them after I got back from scarborough. With no luck. Ah well, maybe The Redhead got 'em.

I wasn't aware or more likely I forgot that they played this faire. I followed their music for years...And like a lot of things (and people) in my life they just sort of dropped away after a while. 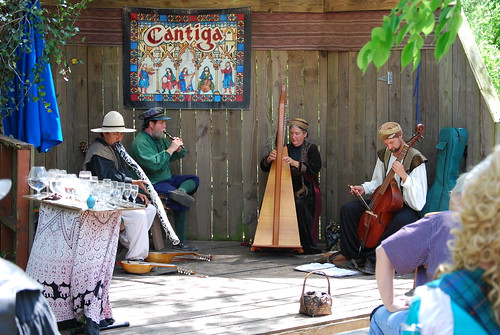 Of course there were a number of years where I just didn't "do" faires anymore. That was my loss. Not the faires'. *grins* But now (very recently) I decided that my love for renaissance faires outweighs whatever sandbags I carry in my heart that kept me away.

I may not go as often as I used to, or never work another faire, or even put on my glad rags. But in my heart and soul I know I am still a Rennie Rat...And I always will be. 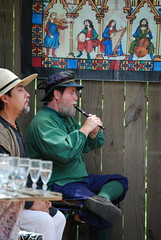 Some times were so good I can't even remember them! Must have been good, right? I entered into my second marriage at the faire. I also met the current wife at that faire.

Alternately some of the worst times in my life were also reflected at faire.

"Doing the Faire" came apart when at one point, The Redhead (2d wife) and I, and SHE (current) and her then husband, all realized seemingly at once that our marriage(s) were coming apart at the seams. 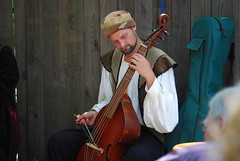 Also the nonprofit group we all worked for up there was selling their contract. Life there (or anywhere else for that matter) just wouldn't be the same for any of us.

The magic died for me that season...And I never got it back. 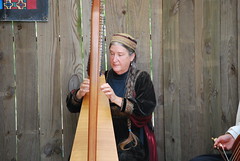 Whoa! I kinda got off track with this post...Cantiga...

"A cantiga (cantica, cantar) is a medieval monophonic song, characteristic of the Galician-Portuguese early literature. It was differentiated from the decir, which was considered a poetic form. The majority of the extant cantigas come from the Cantigas de Santa Maria, which contains over four hundred cantigas either in praise of or describing miraculous interventions by Mary, mother of Jesus. There are a small number of extant secular cantigas with music which are not from this repertoire by Martín Codax and Denis of Portugal. There are other secular cantigas which survive without music.

Cantiga is also the name of a poetic and musical form of the Renaissance, often associated with the villancico and the canción."From wikipedia 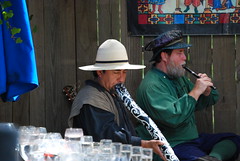 This seems appropriate for this group as well. The group seems to be a central part of my faire experience. They had stages near all of the locations that my group had at the faire. We had several. It was a large group. 80 + folk. There'd be 30 to 40 of us working the faire at any given time...

Inevitably, when shit went down (or up), they were likely nearby. So the lilting tunes, were present as well as some of the more serious pieces were there as well.

They even played the reception for my marriage to The Redhead. Thay came and played minus the harpist, no way was I making them drag that massive thing down the hill to the reception area...

Why am I telling you this? Is there a point?

Well I was delighted to find them at Scarborough. I sat through two of their sets. Did that bring back a flood of memories...The good, the bad and the outright ugly.

I sat there listening to their fine musical interpretations and shooting pictures of them and the surrounding crowds.

As I did, a profound sadness came over me and I was glad for the camera to put up to my face and the sunglasses I had on, for soon tears were streaming down my face, my body wracked with the occassional sob. But I couldn't, or wouldn't leave. I was "processing" as some of my more esoteric styled friends would put it. This ia why out of the 30-40 pictures I shot, these are the ones I find acceptable. The rest were out of focus, over or under exposed. And so they didn't make the cut.

I was the cause of a lot of harm back then. Of course I was hurt as well. No matter.
Reckon I was profoundly unhappy and fucking crazed. I have "changed" after all this time I would like to think. I'd like a second chance with some of these people. But you know, life doesn't offer many of those.

I just hope that those that I harmed can find it in their hearts to forgive me for being the idiot that I was. I know that I have only begun to forgive myself...

Boy! This entry rambled off into a direction I didn't expect. I was quite happy to find Cantiga has an entry at Last.fm, though it seems somewhat dated as there are four albums out now. http://www.last.fm/music/Cantiga

That Cantiga is avaialble for your listening pleasure on last.fm?

Go and give 'em a listen if you have an account. If you don't...GET ONE. NOW!

Why are you still sitting here reading this entry?

On the way back from Waxahachie, I decided to take the road REALLY less travelled. I set my GPS for the SHORTEST distance to home.The default is the fastest. After a couple warnings:

It (the GPS) took me through some of the prettiest farm and ranch country I've seen in quite some time. I also set a waypoint for Washington-on-the-Brazos. The birthplace of the Republic of Texas.
I was in a bit of a hurry to get there as I wasn't sure what time they would close, so I didn't stop aqnd snap too many pictures off.

But this one is one of the best... At one point on one of these little county roads that you could barely call a two lane the trees almost completely covered the road... 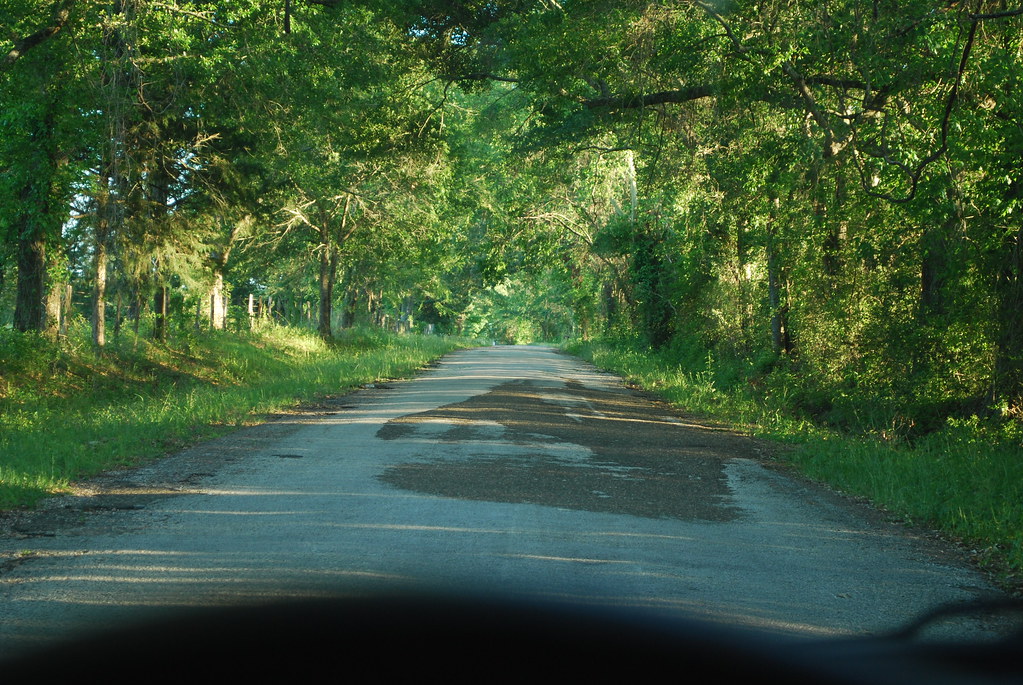 I make no apologies for leaving it large, as I think this gives you the full effect. And there is an even larger version on line...

Considering it was taken through my dirty windshield I think it came out all right.

Oh and by the way. I still got there too late to get into the museums. There are two on site.

The set is not my best work but it is there if you wanna have a look.

I think I'll set the GPS to do that a little more often!
Collapse