As I was getting into my car yesterday afternoon I looked up at the fence that surrounds the Park & Ride.

The wire on this Barb Wire looks to have been coated with something, while the actual barb pieces are au natural, so to speak. 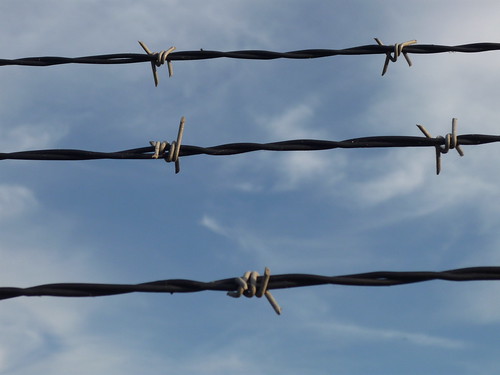 I thought that was kind of odd...

“The problem with Livejournal is that we all think we are so close, but really, we know nothing about each other. Ask me something you think you should know about me. Something that should be obvious, but you have no idea about. Then post this in your LJ and find out what people don’t know about you.”

So… ask. Something you think you should know, but don’t.


And I hardly ever do these things...So now is your chance!

I rode down in the elevator with a pair of ladies, (both long term employees) they were talking about their counterparts in Manila, whom they had trained to take their goddam jobs. Talking about the non existing jobs on the
inhouse posting client.

"Well it is pretty obvious that they don't really expect us to find anything or hang around!"

The other replied, "Probably true, but it's all good."

They both looked at me dumbfounded.

It isn't "all good". They've shipped your jobs overseas and they are putting two highly skilled workers on the street. You wanna explain to me just how that is all good. IT FRIGGIN' SUCKS!!!

It's okay to say this sucks. Because it does. Doesn't it? What are they gonna do? Fire you? No. They've already done that.

They both laughed and said I was right. "It really does suck," one said.

"Big time suckage," the other admitted.

We talked for a little while longer. And as we parted ways they both smiled and said that they never knew what I was going to say or do! But we do feel better.