Went to get my hair cut today after work. While I was sitting in the chair I got to thinking. When I first met John Michael, my hair was long. Like middle of my back long...That’s been a while. And once the house sells, I’ll have to find some one else to cut it.

When he finished today, my hair was no longer than the width of a finger. And the shards or scraps that fell on to the covering? A lotta gray in there...

Yesterday once I was released from Jury duty, I decided to do a little road trip. Took a few pictures of downtown from the eighth floor of the parking garage I was parked for court. Then cruised back out to the house to change clothes. Eventually ended up on Texas 288 all the way down to the coast. And then the little coast road up to Galveston. From there I went to Kemah And then back home. Took a pile of pictures which I’m about to upload. I’ll post some of those tomorrow.

Just about at the end of 288, there’s a little community called Quintana or Quintana Beach. I took a little time and drove through some of the back streets. A lot of the houses were for sale...Why? Because right behind this neighborhood one of the largest industrial plants I’ve ever come across was planted. Not so much the size of the plant itself, but the structures, what ever they are for are simply Monstrous! I think maybe Dow Chemical? Never seen anything like it.

Google map doesn’t do this thing justice. I’m sure the owners of those homes probably had no idea. Of course, still a lot of Hurricane damage down there. Some stuff is just too far gone and abandoned. And not just there either. All the way up the coast and into Galveston. Damned shame. Lot of (re)construction going on too.

Here’s a photo of downtown from a side I rarely get to. This was taken from a parking garage where I parked for jury duty. Eighth floor. Not too bad. 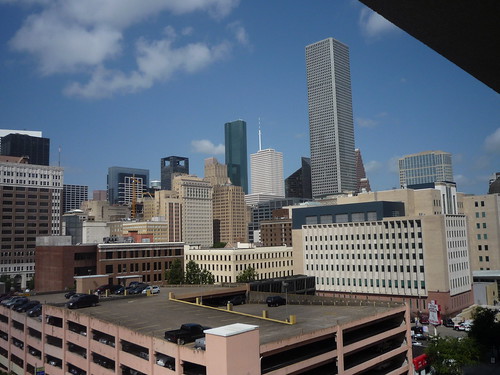 The building I work in is central. White building with a long antenna. When I moved to Houston, it was the tallest building in downtown. That was the late 70’s.

And those of y’all that have been with me a while might remember the road-trip I took to galveston for my 50th birthday. I had dinner in a Hooters that was over the Gulf the night before my birthday. 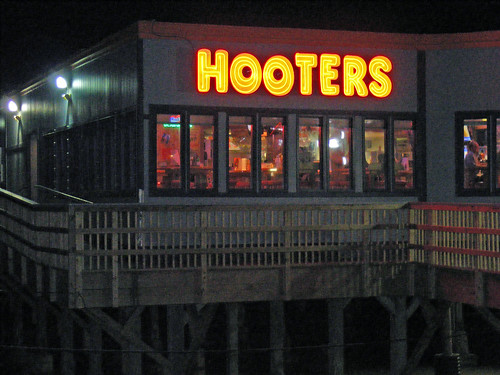 This is what was left after Hurricane Ike. Nothing but the pilings are left. The person wandering between the pilings was a bored lifeguard. 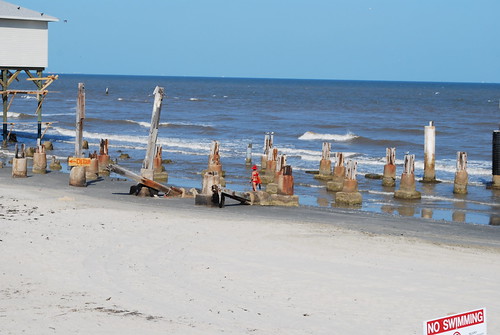 When you build your house upon the sand...
Collapse