The management here at the apartments have changed the name of my apartment complex. But I liked living at the Verandah! It sounded classy. What the fuck is a Halstead? I know what a verandah is!

But really it doesn’t matter... *grins*

Got my new Auto-policy today - Cool. 6 months coverage for me, myself, and I costs considerably less than Herself and I on the old policy. I let it lapse. And went and got new. For a LOT less out of pocket. I even paid the 6 months up front to Progressive.

And in today’s mail I got a rather threatening letter from the assholes at my old insurance company. No names but their initials are AF SPARTAN. Screw ‘em. More on that bullshit below. *grins*

So anyways...I went from a mountain of paper to a few hills...

Still too much, but C’est la vie! Apparently depending on the amount of paper you generate is how some folks tell you are still alive...

Shred it - Working this now as I do this entry. And man is there a pile of it. As an aside here, when your new shredder is telling you it is full (by shutting off intermittently, apparently) one should listen. Other wise one ends up with a not so nice shredded paper mess. Which one then has to clean up. This can be annoying. Especially when one has much better things to do...

But making that mess also let me get out the Dyson thinking ‘Well let’s just see what it can do with THIS CRAP!’ 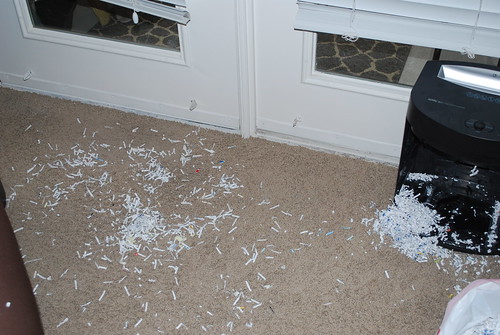 So I made a bag of shreddings. 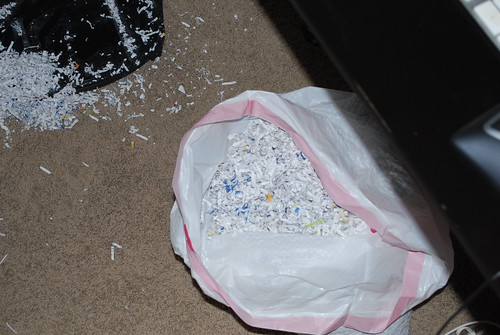 And I made a pretty good mess of it as the container would not stay in the damned bag.

The vacuum did a pretty good job of getting 99.99 percent of it all up. It really SUCKS! My only beef with getting the smaller Dyson is the size of the canister. This mess overfilled the thing. TWICE! 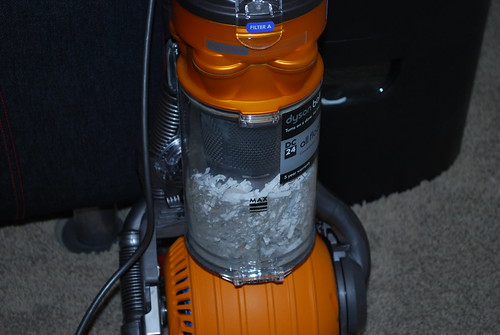 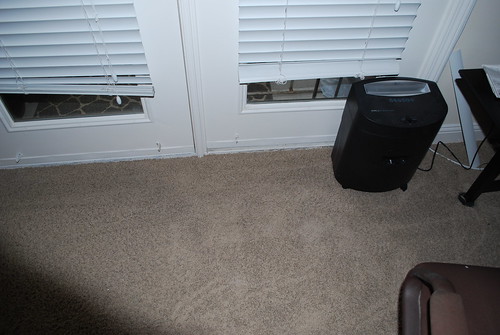 Trash it - Pretty self explanatory.

File it - Uh Yeah. Got a pile of this stuff to do. The filing cabinet is in my closet and it is pretty easy to just walk in there put the stuff to be filed on top of the cabinet and walk away. So there’s even more of that to do now. Meh.

Deal With it - Stuff that ain’t bills but still needs my attention before I can file it. Or shred it. Or trash it. Or maybe even pay it.

Pay it - My never ending stack of stuff that well, needs paid for!

Oh yeah and there is a growing stack of magazines I should be reading instead of smoking crack playing Borderlands on the 360.

Old Insurance Company
These guys had pissed me off already when Herself’s son wrecked the X-Terra. Didn’t cover the accident, totaled the damned truck and then wouldn’t take it off the policy until I pitched a holy bitch and wrote them a nasty letter.

Then they wouldn’t take Herself off the damned policy until she wrote them a letter saying she wanted off. Of course she never did this. At this point it’s moot anyway.

So I was already pissed and had decided once I got moved and had a new address they were gonna be history anyway. The verbiage on the cancellation notice itself wasn’t what got me. It was the Postscript.

P.S Policy Cancellation was reported to the State as of 00.01 am on 12/12/09. Your insurance validity can now be checked by the police, just by running the license plate.
First offence can cost $175-$350. Subsequent offenses blah-blah-blahbity-blah-blah.

Number one. I didn’t know they did that. And Number two, who the hell initialized that piece of legislation in the state of Texas. And Number three, the letter itself was rife with grammatical errors and misspellings.

It was like someone who is ESL wrote the damned letter and no-one proofed it. In this day and age of ubiquitous word processing programs there is not really an excuse for making errors such as the ones I saw.

Goofy frickin’ journal software I use to blog with. It would make changes to spelling on it’s own. Now normally I wouldn’t mind a little help. But this software would take things that it didn’t know and change them into something completely out of context. Finally switched that mess off. Jeebus!
Collapse