I like mine with a splash of milk and some “Sugar in the Raw” sprinkled on top. Other than that I like it best in COOKIE form! *grins*

I loved oatmeal as a kid. But as I got older, into my 20’s, I mean, I fell off of the oatmeal wagon. But since I was shamed into paying attention to things like cholesterol levels in the last year or so, I’ve started eating the stuff again.

My kids all liked the flavored instant variety, but I never developed a taste for it really. It would do in a pinch, but I really preferred the good ol’ stovetop variety.

This morning I had a bowl of oatmeal, couple pieces of wheat toast and a tangerine! And a glass of 2% milk.

So... What did you have for breakfast?

Got off my ass (or at least out of the apartment yesterday afternoon and took a load of stuff out to my storeroom out in Katy.

It wasn’t like I was just sitting on my duff. Did my laundry and cleaned and policed the kitchen. Went through my mail which I have a tendency to ignore lately. Trying to decide where to hang some pictures in here and it seems to be harder than I thought it was gonna be. I need to get this stuff on the walls and off my bedroom floor. Made some minor decisions, that will probably require adjustments once I finally get to hanging things up.

I was also looking for some specific things that I was sure were out there. Some picture frames as well as some pictures of my Scandinavian ancestors. And the electronic picture frame The Offspring gave to me earlier this year.

Had to drag half of the stuff in there out, because the boxes I wanted to get to were in the back, I thought. And they were. And they were also on the friggin’ bottom of the two stacks! Always seems to be that way, doesn’t it?

Think I was fighting off some GI infection or some kinda bug. Seemed like every 15 minutes I had to go. NOW. RIGHT NOW! So I was there from about 2 to six-ish, I think. Got a “checking in” call from one of my friends. He was up in The Woodlands at his GF’s place. And he was really happy. Pretty sure it was of the liquid variety. *heh* He was VERY happy.

spiderlilyfairy pinged me to see if I wanted to go for coffee and I did want to go, but I took a look (and a whiff) at myself and said, “Tomorrow, if you please” I was covered in dust and I stank. So I begged off because I needed a shower and once I’d had one I wasn’t likely to leave again. You know when you hit your shirt and make a dust cloud...

So I found most of the stuff I was looking for. Found another box of books too, ugh. (left them out there) got my load unloaded, the room a little better organized, the stuff I wanted to take loaded, Shoved everything back in there, a little better organized as I said. Now I’ve got a better idea of where stuff is, and how much effort it will take to get to it. Locked it up and left.

And realized... I was RAVENOUS. You could probably hear my stomach growl in San Antone!

As I said, I was not suitable for being seen in public or private. Decided screw it, I want some wings and chips. Swung by a Buffalo Wild Wings. I beat the dust off as best I could, went into the bar and placed an order to go. With the “HOT” sauce of course! And had a big Blue Moon Ale while I was waiting and trying to be as small and un-noticed as is possible for a 250 pound dusty guy. My order came out just as I was finished slugging my beer down. Got to the apt, unloaded and sat down to eat. The sauces at BWW have been kind of inconsistent of late, but they sure got it right this time! I was on FIRE by the time I finished eating. I had debated whether or not to get “Blazing” and I was glad I hadn’t.

By the time I got my shower I was dog tired. Fell into bed around 11 or so and was gone...

Apparently one of our systems didn’t come back online after a routine maintenance outage. I became aware about noon.

And my laptop is in *sigh* BOAT ANCHOR mode again. Had to call a co-worker to handle the issue. So far:

Talked to one guy from Holland twice
One guy from London
My co-worker several times.
A situation manager
A helpdesk agent

The last conversation was a four way ~ Me, Situation Manager, Helpdesk agent, My co-worker, and a change manager.

I don’t dare leave the apartment because if they don’t get some resolution soon, I’m gonna have to go to the office and log on from there. Did I say my laptop was going to be sitting at the bottom of the pool pretty soon? BECAUSE I’M GONNA TOSS IT OFF MY FOURTH FLOOR BALCONY if I have to go in to the office, it will be splashy time for this piece of $hi#!!

The Asians came on shift at around 5:00 so I was released from servitude to the damned Bat phone. Gotta lug my laptop in tomorrow though and try and figure out WTF!?

And no I didn’t launch my laptop off the patio into the pool... That would be silly! I’d aim for concrete, where I could have the satisfaction of watching the stupid machine SHATTER into a thousand pieces! Of course they’d probably want me to pay for it. And take some anger management course or something or other. Why waste my time and money. I’m really not that angry anyway. *grins*

At any rate while I was pining for freedom *grins* I started playing with the Digital Photo-Frame I brought back out of my storage room. Had a few tense moments of frustration when I managed to change the default language into frickin’ chinese!! Thing comes with a remote and get this: bluetooth (!) Haven’t played with that particular feature yet. The dang thing didn’t come with a manual. I think it was a return or something.

After I managed to reset the defaults (which are in English for some reason, I looked through some of my pictures over the last three years or so. Yanno, I don’t take half bad pictures when I’m inspired.

There are months when I shoot very little or even NO pictures.

The there are other months that are at the complete other end of the spectrum! Hundreds of photos shot. Think I have a month or two that were over a THOUSAND! My philosophy on photography is since it is digital, if one is good then 10 is better! *heh* Bound to get at least one or two that are presentable.

So I loaded up 120 of my favorite photos onto a spare memory card and slotted it into the frame. Had to tweak the display settings a bit. But it looks pretty good.

Then I looked out my bedroom window and what did I see? Eight tiny reind- Naw I didn’t see that. I saw this! 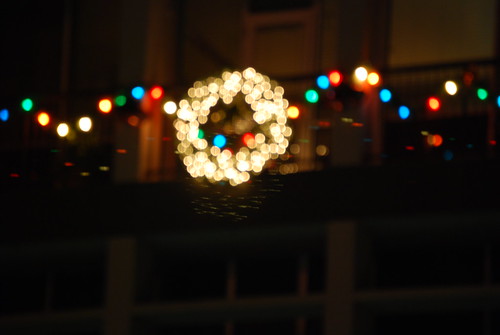 Shot out of focus on purpose. And then there’s this: 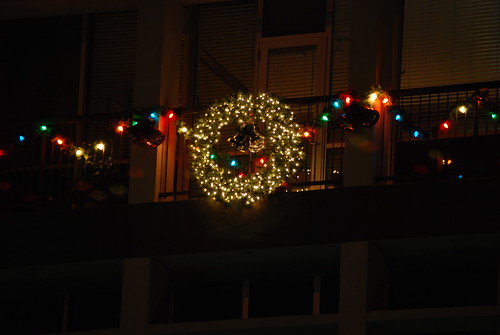