Getting a VERY late start this moirning. Going into the office because my laptop still doesn’t have all the tools I need to work efficiently from home. I’ll tqke care of that today.

Trying to decide whether to Park and Ride or drive. Driving is winning (even though it is expensive to park) because I’m not planning to stay all day. Plus I’m really late. Only team member in the USofA that is working today so I cannot take the day off.

No plans for NYE. Might just stay home and have a drink around midnight... Or I may hit some bar.

Might see if I can hookup with The Canadians. Or not. Haven’t seen them since forever. But I was pretty pissed. Miss ‘em though. And they were pretty damned good to me when I needed it. Love ‘em to death.

I might get pleasantly buzzed but there will certainly be no overdoing of the drink. Been so long since I done that. Like last NYE? I hate hangovers so...

Standing on my patio with a cold frosty beer in my other hand.

Although '09 wasn't a particularly good year for me, I gotta say it could have been a helluva lot worse. Or better.

I wasn't gonna do one of those retrospective posts, but maybe I will afterall. At any rate I am gonna go back and have a look at the year that was. Probably be good for me.

Also trying to decide if I wanna make the trip to the (a) liquor store and pick up some Baileys or equal, so I can have it in my coffee in the morning.

Probably will crack open the bottle of single malt I bought when I moved in here. Still sitting on my kitchen counter unopened.But not till about 10 of 12.

Before you ask ~ Glenfiddich 15 years old. Should be tasty enough to toast in the new year with!

Think the Irish cream quest is probably on as well.

Witch *heh*of you I glommed this from: 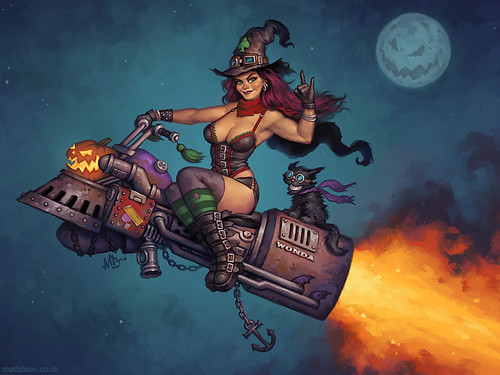 But it is now my desktop background. A little off I know but hey, I like the wench...

So, firmly ensconced in my apartment for the night. Sitting here at the computer drinking a glass of water, listening to music (would you believe the soundtrack from “Midnight Express”?) and surfing a little, reading y’all’s posts or lack thereof *grins*. Seems you all have lives.

A nice quiet productive day at Cube City. I felt it to be productive. Once I managed to get there *laughs*. Of course I think the Asian Overlord’s idea of productive and mine are somewhat different. Only a couple of folk on the floor today.

Had a couple of short conversations via IM today with some folks in Malaysia. Thought about the Asian Overlord a bit today as well. Haven’t really heard a peep out of him since the news about our jobs came down from on high. Pretty much OK with that.

Bailed just a little earlier than is usual for me.

Been out and had a nice dinner with

phoenixisrisen at Los Tios. We were gonna go to Fadi’s but strangely it was closed early. A true WTF?! moment.

As I was locking my apartment door my next door neighbor was also locking her door and then running up the hall. Really nice looking young black gal. Looks good running in heels too. *leers* Had myself a goooooooood look.

The quest for Irish Cream has been fulfilled. Liquor store was B-U-S-Y-! Imagine this is one of their best sales days.

Opted for Saint Brendan’s rather than Bailey’s. Because I am a cheap bastard...

Think I have found my next two bits of geekery swag...

Wacom Bamboo Touch. It actually looks like a viable mouse replacement. Uses gestures similar to the touch pad on the MBP’s or iPhone or the iPod Touch. Cool stuff! Won’t be a big stretch for me as I already have an intuos I use for other things... Pre touch tech though. The one I have is nearly as long and wide as my (closed) MBP! The bamboo is about the size of a good trackball I think.

The other is the Slimkey V2 Stand with USB2.0. Go a long way to help me with clutter on my workstation here at the house when I’m not using the computer. AS IF! I. Am. Never. Using. The. Computer. *laughs*

Happy New Year to you all, my friends!