Get email from flickr. Someone has added this photo to their gallery. 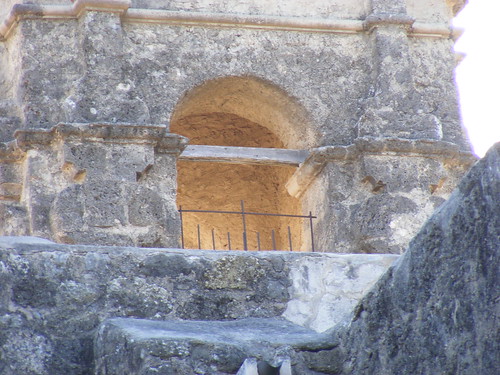 It is an ok picture, but certainly not the best one from that trip

eats_veggies and I made to the missions in San Antonio...

Some good pictures in that set. I should get a print or two done.

Had a call from an old colleague today. He had that email forwarded to him and decided to give me a call. I think the last time I saw him his son was 3. Kid will be 18 in 6 months.

Long time no see. Another guy who’s home computer systems I built, upgraded and maintained. Looks like they have 2 or 3 desktops and 4 laptops now... Heh.

Practically had to swim out to his house in suburbia. Then we took off to the country for a bit. It was raining quite hard on and off. Glad he was driving. Had to make a couple of high water crossings. Nice ride. Hung out at his country place and smoked cigars and drank beer. We didn’t spend too long at it as we were somewhat afraid of water being over the roads. Head back to the ‘burbs and became re-aquainted with his wife, and met his 13 year old daughter.

Entertained them for a while. Went out for dinner. We (the adults) had a couple of drinks. Once we got back to his place I could tell it was time to bail and drove home. Much easier drive coming home than it was getting out to his place to start with. It’s dark so less showers are being formed.

Was good to hang with ‘em both again. Talked about mutual folks we know and what they are up to. Conversation was all over the board actually. We had a lot to catch up on! **grins**

They seem to suit each other quite well.

I probably won’t be up for too much longer...*grins*

Nope. Not too much longer at all.
Collapse