I went to a "Celebration Of Life" on Friday. Better than calling it a funeral, I reckon. It was a service for a friend's Mother who had died (thankfully and finally) of complications of Alzheimer's. It was a nice event, except my friend Michele had prepared a nice slideshow in some proprietary HP software and then couldn't get it to talk to the projector they had set up. Or even to run in the final minutes before the service. Blargh! They ended up just setting one or two folders of photos to rotate. Too bad, because the rest of the photos were pretty good too.

At any rate, I got to meet Michele's brother. Nice fella. He's an (retired) attorney. Lives in Panama. We had all gone to Michele and richard's after the service, along with one of M's cousins that came in from MA.

Michele's brother kept looking at me... I finally turned to him and said, "What?"

I admitted that no we had never met. M piped in with, "You know, bro, T used to work at the Renaissance Festival..."

I said, "yeah a long. LONG time ago." And I whipped up this pic on my phone.

He (the brother) said, "OMG! I remember you. You were great! And Hardcore!" Everyone in the room laughed (including me) except the cousin, who had no idea what we were talking about.

I admitted that yeah I was pretty well into it at the time. "My God! What in the world did I do to you that you still remember me after all this time?" I asked.

"Well, you tried to get me to buy my wife a palm reading or something. I wasn't going for it. Then you offered a foot massage given by 'His Majesty's own Royal Rubbers' or some such."

"I wouldn't do that either. And you followed us all the way up the damned street, talking shit about what a cheap guy I was that I didn't think my lady friend was worth 15 bucks!"

"Well no, not at the time. We went on our way and found our way down the hill to the Gypsy camp a couple hours later."

"Uh... You know I don't remember any of this, right? Because I did this to everyone..."

"Well that's okay. As I said we made our way down the hill and damned if you weren't THERE TOO! You sicced one of your girls on me... She was gorgeous!"

"She was a redhead and really a good talker too..."

"That was no girl, dude! That was my WIFE!. That WAS a long time ago."

"She was quite distracting!" Heh! I know. I Know. "She no sooner linked her arm through mine and led me off a ways and you latched onto the missus and before I knew what had happened you had her laying on a masseuses table getting a foot rub and had her lined up for a tarot reading as well!"

"And The RedHead and you extracted twenty five dollars from me for my wife's stuff and then talked ME into getting a massage as well!"

"HA! You got the quantity discount!"

"Well I could hardly refuse, as the wife was already seated and you both basically double teamed me... It was actually damned good." he said. "Then as we were stepping out of the pavillion you both started shouting about another satisfied couple!"

"Yeah. We did that often. Drummed up more business that way, yelling into the crowd."

"We had the best time at the faire that day. Best time before or since! Talked about that day for MONTHS after. You made our day!"

I stood and did a courtly bow. Everyone laughed again.

"We looked for y'all the next few times we went too. Never did catch you guys again though. I can't wait to tell the wife I saw/met you today!"

Small frickin world, eh? Even after 15 plus years the guy still remembered that day.

I was frickin' FAMOUS! Or maybe that was INfamous! Or both!

When I got home yesterday I noticed there was a kind of funk in the apartment. Not a bad smell, not good, just off a bit. Kind of plasticy and kind of metally. It was driving me crazy.

I isolated the rooms here (meaning I closed the doors ~ *grins*) at La Casita and confirmed it was in the living room/dining/kitchen area. In other words the main area. Kinda sorta thought it was this *clean beach towel* I had in my go to the pool backpack. Threw it in the wash. Stepped outside at some point and nooooooo, that wasn't it. Figured since I smelled it when I sat down at the dining table, maybe it was the table cloth. Threw it in the pile of stuff to be washed. Next trip outside proved ~ Nope! That wasn't it...

Remember this post, in which I had pulled out my old PC and fired it up? I was beginning to wonder... And yes (Can you imagine what I must have looked like going about the Living room having a whiff of everything? Well I can. Kinda funny actually) I got dowwn and got... Well. Something. So I unplugged the thing and set it out on the porch. Let things air out for a while. And that was it. So I wonder what's in there that either melted or got overheated. Soon as I have time I'll pull the case open and see if I can figure it out. I may have to take a loss on the thing though.

If so I'll have to pull the hard drive and take a sledge hammer to it. Shame too. But it is old and did sit up idle for quite the time. CRAAAAAAAAP!

Opened the freezer a while ago and everything was frost covered. In a f-frost f-free f-freezer.

Apparently when I was rooting around in there for something to eat yesterday, I didn't close the thing properly. I don't think anything got thawed out. I hope not. It looks like it snowed in there. Looking better than it did a little bit ago but jeeeeeeeeez. 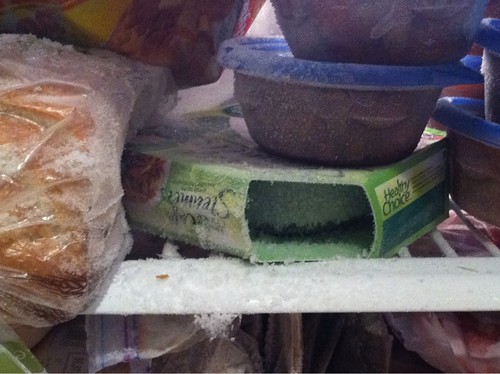 One of the things about the house, is having the garage. I miss my workspace. I cannot exactly go out on my patio and get crazy with a Dremel Moto-tool. Got a couple of projects I could be working on. My storage space out in the hinterlands is not a powered space. Dunno what I can do about that really.

The weather over the last two weeks has just been GORGEOUS. Cool and sunny and bright. Today though it is expected to hit at least 90F ~ Better than 99, I know. But man, no doors and windows open today. Okay maybe for a little while. *grins* Nope. Too humid.

We need some more of the cool. And rain. We need rain. so I'm told.

I've been using Google Calendar for about the last six months. I don't like the interface. Like iCal much better.

And at some point an address book sync between my iPhone and iPad and my Mac's addressbook app deleted everything in my address book! Think it was the update to IOS 4.1 through iTunes or something that did it. Probably my fault. Macs are great and all but sometimes OSX can be a little unforgiving if you tweak the app settings a little too extremely. I had to do a restore from a backup for the iphone to get it all back and resynced.

And now with a relatively new computer inna da house, I need a solution that won't screw up like that.

Enter MobileMe. Don't care about the email sync (I use gmail and the native mail app on the phone and pad work rather nicely together with gmaul) and the cloud storage is a bit tiny for my backup purposes. But the Calendar and Address book sync I think I can use. Heavily. Hopefully I can do away with Gcal.

Getting ready for this one.

Of Man (Me) and the Hospital

Going to do my pre-check-in at the hospital tomorrow. Surgery is scheduled for Friday! Kinda excited about this. Even though the surgeon said he will use the same incision going in. Hmmm. That's gonna make for some nice scar tissue.

One more thing before I go... Another one of my favorites from renaissance. This guy standing off to the side of the chapel geting ready for his turn at the altar. 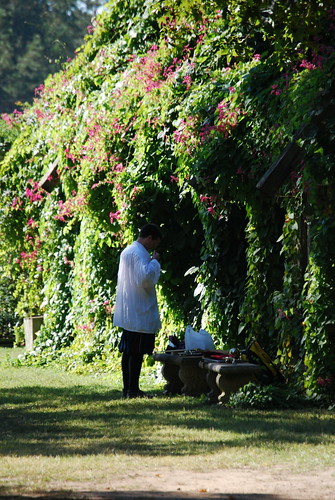