Some Excitement Around Here...

At la casita, last night early this AM. As I was putting the key in my lock last night, the damned fire alarm went off site wide. First time that's happened since I've been here.

Weird frickin' way to meet yer neighbors though. After about 20 minutes these guys showed up: 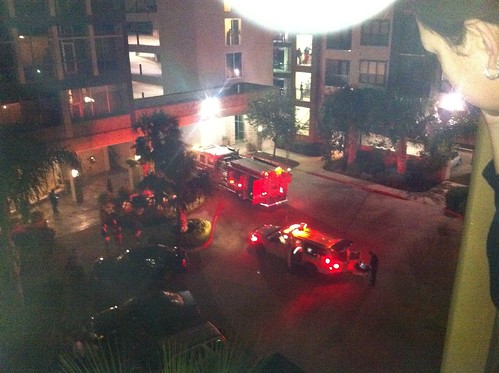 Dunno about you, but I think that's just a bit too long. Heard the sprinklers on 2 and 3 went off in places and one of the watermains broke. And there was some sort of funky metallic odor wafting up from below. More than one of us said we could sort of taste/feel it at the back of the throat. After about an hour and a half they pulled out.

In other (sort of) related news, I am still successful with my no smoking campaign. Of course, I did stumble onto these eCigs: Blu Cigs. Thanks for the tip

Now before you say "nuh-huh". These things don't produce smoke, just water vapor with a dose of nicotine. There is no smoke and no "Tar" from what I've been able to read. And I use this thing less than I did 'for real' smokes. The main reason I bought into this is because (well) I'm weak. Every time I got into a trigger situation there was a big fat fail.

I hate the frickin' gum and the lozenges. Blu seems to keep me from eating the entire contents of my larder and fridge, so there is that too.

I gotta say that after two weeks (without smokes) I already feel better. My asthma seems to be in full retreat these days. And last night as I walked up a flight of stairs I wasn't reaching for an asthma inhaler. Was still a little short of breath, but it is soooooooooo much better than several weeks ago. I seem to have a bit more energy as well.

I still intend to kick nicotine and these seem to be helping me get there.
Tags: 42, my exciting life, wheres the fire
Subscribe