There Are So Many Things I've Missed...

With this fucking illness. For so long.

*Trying not to bitch about it, but some things should be said*

Like going out to lunch while running some errands. 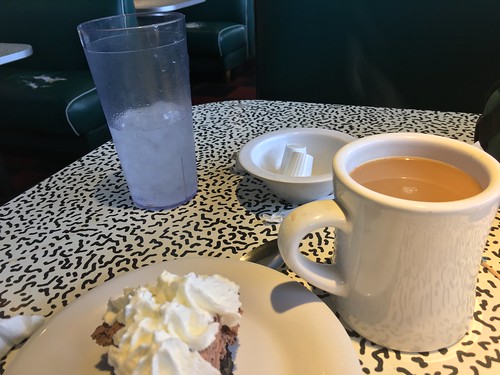 I ate at the Avalon Diner (again. So what. I like diner food) and while I was having lunch I decided to walk over to the Bed, Bath, and Beyond that's close by just for a walk about. Plus I was looking for a couple of things.

A set of wall hooks. Or two. One of those curved shower curtain rods. Could have bought them online. No matter. I can use the movement.

Besides a walk through BB&B? Who can resist that when you've got the time?

Waiter at the Avalon gave me the senior discount. I didn't even ask. Haha!

I HATE CRAPPING IN PUBLIC RESTROOMS. But sometimes you've no choice. Sorry guys. Coffee... Need I say more? Half a pot here at home and then their industrial strength mud with my BLT...

Then I left the diner... And started walking...

And the woman (standing outside of a Guitar Center Store) blowing it was a good distance away too. I had already passed the store and found a handy bench. But I was down wind from the entrance. I think it was more the smell than any thing else. Dunno really. It irritated me nonetheless.

That BB&B was a lot further away than I thought. I was about halfway (by my reckoning) when I checked Google.

Took me a long time, but I got there. And thank the gods I had sense enough to snag a handy (and loose) Hobby Lobby shopping cart. Wouldn't shop there these days, but I'll confiscate one of their carts for my use. I could drop my air bottle and the bag with my other stuff in it and push it. Meant I could go a bit further before I had to stop. And I stopped quite a few times.

But it sure popped my step count (*not that I'm counting, huh!*) into the stratosphere. 4,998 steps for about 2 miles! And I huffed my way all around the damned BB&B too! My usual count ***(still not counting, huh!) ***averages between the high hundreds to about 1,700.

So I know what this means...

The über guy that picked me up at BB&B, Alfred, pulled up, and popped the trunk and loaded my stuff without so much as a, "By your leave!" It was more of a, "Hey Tom. You can have a seat in the back. I got this." He's from New York and we were both lively and full of conversation. I told him how surprised I was with my recent adventures with COPD both pre and post hospital. And he told me about when he rec'd a gunshot wound in the Bronx!

And I've got another tale to tell as well. The dang DAWG, Toby got by both the House-mate and I and shot out the front door last night after I took out the trash.

We spent a good 20 minutes wrangling his ass back to the house. That'll be another entry. Maybe.