Been a while since I’ve posted. It is short and sweet and it’s one of my favorites...

Of making entries. Been nearly three (!) weeks since my last update. Guess I should say something about that! But not tonight. Tiny keyboards (and big fingers) do not make it easy to do a long update.

Bless me fadder for I have sinned. It has been three weeks since my last confession...

❞The aim of life is to live, and to live means to be aware, joyously, drunkenly, serenely, divinely aware.❝

I have quite a bit of experience at this! Except for maybe the serenity part. But I am working on that!~ TexasT's

They don't make this thing anymore. Not in the cheap wired version. Make a "Magic" Blue tooth version... * sigh *. AT TWICE THE PRICE. Not everything has to be fucking wireless.

Kind of wondering if I just let it sit for a while (although it has already been a few days) if I'll get that functionality back.

* One thing is certain, I need to get it off my desk. I keep trying to * USE THE FUCKER!!

This is what happens when you go to bed at midnight. And I awoke suddenly as well. Not sure why. Likely some not remembered uneasy dream. Laid around trying to get back to sleep until around half past six. Tried HARD too. Works as well as it ever does. Which is - not at all.

Quote of the Day

❝Note to self: do not delete the things you’ve done.❞
~ Sofia Indy, Here’s how I created my own misery. on medium.

Not the first time I've seen this work. For some reason, it is speaking to me. Need to ponder it a bit.

My B-I-L, "G" has followed me on quora.com. Unusual- firstly; because we ~~rarely~~ EVER have any kind of contact at all. Secondly; I've never seen any indication of he *or my sister, "J"* have any sort of online presence at all. I mean, at all. She gets on Facebook a bit. I've never seen anything from him online. Or if I have, it has been so rare as to have been forgotten.

The the thing is, I suspect they may have voted for Trump. From the noise she was making before the election. It would inexcusable. Indefensible. But I make it a point not to talk politics with my sister.

Ha! I reckon things could be worse, eh? 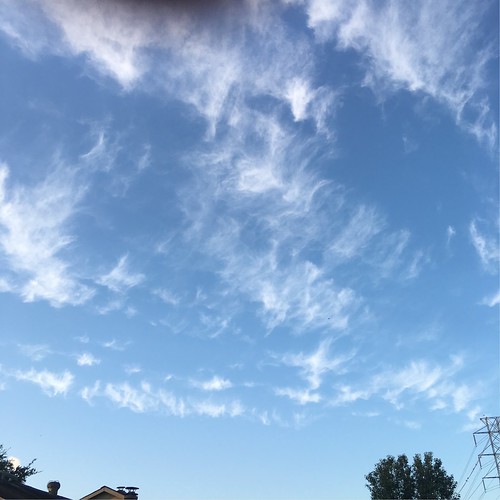 #the_view_from_where_i_am #photographs
Sitting in the back yard in the morning with my first cup of coffee and this was the sky that greeted me.


The Rest...
- On track with my meds
- Washed the bedclothes and put them back on the bed. Took 25 fucking minutes to do that1 . Used a timer. Because I wanted to see how long it took.
- Got a load in the dryer. One in the wash. One in reserve2 . *one to go*
- Put up an Opinion Piece on medium. Linked to Facebook and Lj accounts. On confederate glorification and why I'm opposed.
- Kept up with the dishes.
- Got my trash ready to go out.
- Took a shower
- Broke a toe3 .
- Trash and recyclables at the curb for collection in the AM
- Coffee is made for in the morning.

I think I've done enough for one day...

Now I agree, if you’re going to do this it needs to be done the right way. Legally. With a general consensus. Not just show up and tear the motherfucker down. That’s wrong. Illegal.

Does consensus in this term mean 'Every one agrees'? No. It does not. It means a majority gets what they want or need. Remember we live in a democratic republic.

If you want to be reminded of the Heritage of Hate and Oppression, then by all means let's keep re-hashing that antique bullshit argument about the war being about State's Rights.

Yeah, the Civil War WAS about state's rights. State's rights of citizens to oppress and own persons of another race. Other than white (in general)... If you were of European stock then...

Well it always comes down to "Other". Other than white.

Read the Articles of Confederation... It is there. And Jefferson Davis himself, the President of the Confederacy, said that the war was about the rights to own slaves.

Again It Ain't About Changing History. No. It ain't...

It isn't about changing history. It's about getting rid of symbols of hate and oppression. Because that is what these things are. The history is still there. You cannot change it. We could do a better job of teaching it though. When I went to school we got a pretty much 'White' washed version of the civil war. And of American History in general.

We keep glorifying these guys. And for what? I mean I get it, the Southern Heritage thing... My dad was Military and when we returned to the States (in 1972 or three) after a posting in Scotland (stories for another time, eh) the Jr. High I attended was Jefferson Davis Jr. High. The High School I attended was Nathan Bedford Forest High School for Gawd's sake.

Our school mascot was a stylized Confederate General. Almost cartoon like. The Stars and Bars (Confederate battle flag) went to every damned football game. We were the fighting Rebels! And up the street? Robert E. Lee HS. And J.E.B. Stuart HS.

I wonder how that sat with the young black men that comprised a good bit of all the athletic squads? That symbol of oppression flying over their heads. You know, I never asked. For one thing, I didn't hang out in that crowd. The Jocks. For another thing - I don't think at that time (the early to mid 1970's) I gave it that much thought. That was shameful on my part. Shameful.

And I was raised in a family without prejudice. But not without White Privilege.

And let me tell you something - I sure as fuck think about it now. Every day. Not because of Charlottesville. That's just the latest low point in a history of low points.

Times change. And so do we. Hopefully we evolve as human beings.

That school was named after that man in protest of a court decision for public school integration by local (white) leaders in 1959. The name was put forth by the United Daughters of the Confederacy.

The man was the first grand wizard of the Klan... The KLAN!

In 2007 the matter of changing the name of the school was put before the Duval County school board and soundly defeated. It came up again in 2013. The vote was unanimous to change the name. And it was finally done in 2014.

And my word, some of the people that went to my school came unglued.

Ashamed to say I knew them.

What did it take? What happened? The demographics of the area surrounding the school changed. As these things are wont to do over a long period of time.

I couldn't care less about the name of that damned school. I last walked those halls in the summer of 1976. Never even looked back.

So yeah, I don't give a flying fuck about the 'heroes' of the Confederacy. And I'm an unabashed southern boy.

Those good ol' boys ain't heroes. Unless you are for oppression and subjugation of other races. Or the vilification of "The Other". That's all about hate there. Hate and fear of people that are different than you are.

So how in the Hell can they stand for anything that is good and just? Answer me that.

And as someone once said, "That's just my opinion, I could be wrong..."

But you know I'm fucking right...

So, there we were on the side of the road and slowly the other driver got out of his car. You know how sometimes you just get sooo stressed and little things just seem so funny?

So I looked down at him and said, "Well, then which one are you?"

And that's how the fight started...

Motherfucker. Some do not like the word. However, it is one of my favorite exclamation points. Which is what I think most cursing is… for me. Punctuation.

I do so admire fine use of the colorful vernacular! A cussing Connoisseur.

#cussing #creative_cursing
First real post on medium. And it hadda be about motherfucker... -*laughs*

Seems a bit - Melancholy doesn't it?
Picked up from ScratchPad on the creative cafe A Medium.com project that promotes, in their words; Poetry, fiction, personal essay and so much more.
And no, I haven't submitted anything for publication there. Have you been to medium.com? Rather interesting concept in social media and blogging *in general*.

So.
I've not been nearly positive enough lately. And for that I apologize. To you. To me.

It's been a hard year. Dealing with all I've been dealing with has made it hard to stay focused on what good there has been. Because there has been and I haven't been showing my gratitude nearly enough.

That said, there is one less person on my friends list.

fragbert removed me at some point this morning.

Picked him up during the recent LJ revival thing. I had seen him around LJ for years. I think he even started that 2017_revival group. He hadn't posted anything since sometime in June anyway. If I remember correctly, it was a post to say he had lost the will, didn't have time, etc...

Maybe I wasn't positive enough or something for him. It's okay, I can be an acquired taste sometimes. Or not.

I don't think we ever really clicked any in any personal way. It happens sometimes. I might have removed him some time back when going through the list in one of my periodic purges. Cannot remember. Doesn't matter. I just got an email that the dude had removed me...

I thought the dude was a bit pompous and pretentious at times. Sometimes it seemed it was just a bit "Forced". If you liked the guy, more power to you. I was not a fan after a bit.

And I can be kind of a dick sometimes too...

There were a few others that I picked up from there that have fizzled out. Happens. Shame though, some seemed quite interesting.

At any rate, I am glad you're here!

Hope the weekend is treating you all right!